Radnóti was born Miklós Glatter in Budapest into an assimilated Jewish family. His life was considerably shaped by the fact that both his mother and his twin brother died at his birth. He refers to this trauma in the title of his compilation Ikrek hava ("Month of Gemini"/"Month of the Twins").

He identifies strongly as a Hungarian. His poetry mingles avant-garde and expressionist themes with a new classical style, a good example being his eclogues. His romantic love poetry is notable as well. Some of his early poetry was published in the short-lived periodical Haladás ("Progress"). His 1935 marriage to Fanni Gyarmati (1912–2014) was exceptionally happy.

Radnóti converted to Catholicism in 1943. Numerous Jewish writers had done so at that time due to the prevailing pervasive anti-Semitism in Hungarian society.

In August 1944 as Yugoslav Partisans led by Tito advanced, Radnóti's group of 3,200 Hungarian Jews was force-marched to central Hungary. On the march most of them died, including Radnóti.

In these last months of his life Radnóti continued to write poems in a small notebook and scraps of paper he kept with him. His last poem was dedicated to his friend Miklós Lorsi, who was shot to death during their death march.

According to witnesses, in early November 1944, Radnóti was severely beaten by a drunken militiaman who had been tormenting him for "scribbling". While passing near Győr, the prisoners were to be placed at the city's hospital, but as it being destroyed by Allied carpet bombing, Radnóti, together with other Jews, was shot, and buried in a mass grave. Today, a statue next to the road commemorates his place of death. Radnóti's body was later re-interred in Budapest's Kerepesi Cemetery.

Posthumous discovery of his last works

Eighteen months after his death, the mass grave was exhumed and in the front pocket of Radnóti's overcoat his small notebook of final poems was found, with instructions in several languages to deliver the notebook to the Budapest University lecturer Gyula Ortutay. The final poems are poignantly lyrical and constitute not only one of the few surviving works of literature written under the Holocaust but masterpieces, such as 'The Seventh Eclogue', and 'Neither Memory Nor Magic,' that rank with the greatest poetry of the century. Possibly his best known poem is the fourth stanza of the Razglednicák (Postcards), where he describes the shooting of another man and then envisions his own death.

These poems serve as one of the most chilling pieces of Holocaust literature. From the touching love poems written to a wife he would never see again to the gruesomely accurate descriptions of Nazi barbarism, Radnoti's words help convey the thoughts and emotions of a man facing one of history's greatest evils. Edward Hirsch calls the posthumous collection of Radnoti's internment poems, Clouded Sky (1946), "one of the pinnacles of Central European poetry this century." "Postcard 4" which was written days before his own death, describes the horror of seeing "his friend, the violinist Miklós Lorsi" executed.

What follows is the poem in its translated version:

I fell next to him.His body rolled over.
It was tight as a string before it snaps.
Shot in the back of the head- "This is how
you'll end." "Just lie quietly," I said to myself.
Patience flowers into death now.
"Der springt noch auf," I heard above me.
Dark filthy blood was drying on my ear.
Szentkiralyszabadja October 31, 1944

Forced March was a "film within a film" feature drama, with Academy Award-nominated actor Chris Sarandon playing Miklos Radnoti, and Dutch star Renée Soutendijk playing his wife Fanni. Sarandon stars as an actor struggling to depict the horrors of the Holocaust in World War II Hungary. He begins to merge with his character of Radnoti, blurring the boundaries of truth & illusion, as he must choose to portray hero or victim, and what legacy to leave.

The movie was shot on location in Hungary and Los Angeles. It was produced by Dick Atkins, directed by Rick King, and written by Dick Atkins & Karl Bardosh. Forced March was first released in October, 1989 at Cinema I in New York City. Then, coinciding with the 25th anniversary of its filming in 1988, the movie had a new digital transfer, was re-edited, and re-opened at the Quad Cinema in New York on 1 November 2013 and showed through 7 November.

Posthumous discovery of his last works 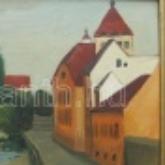