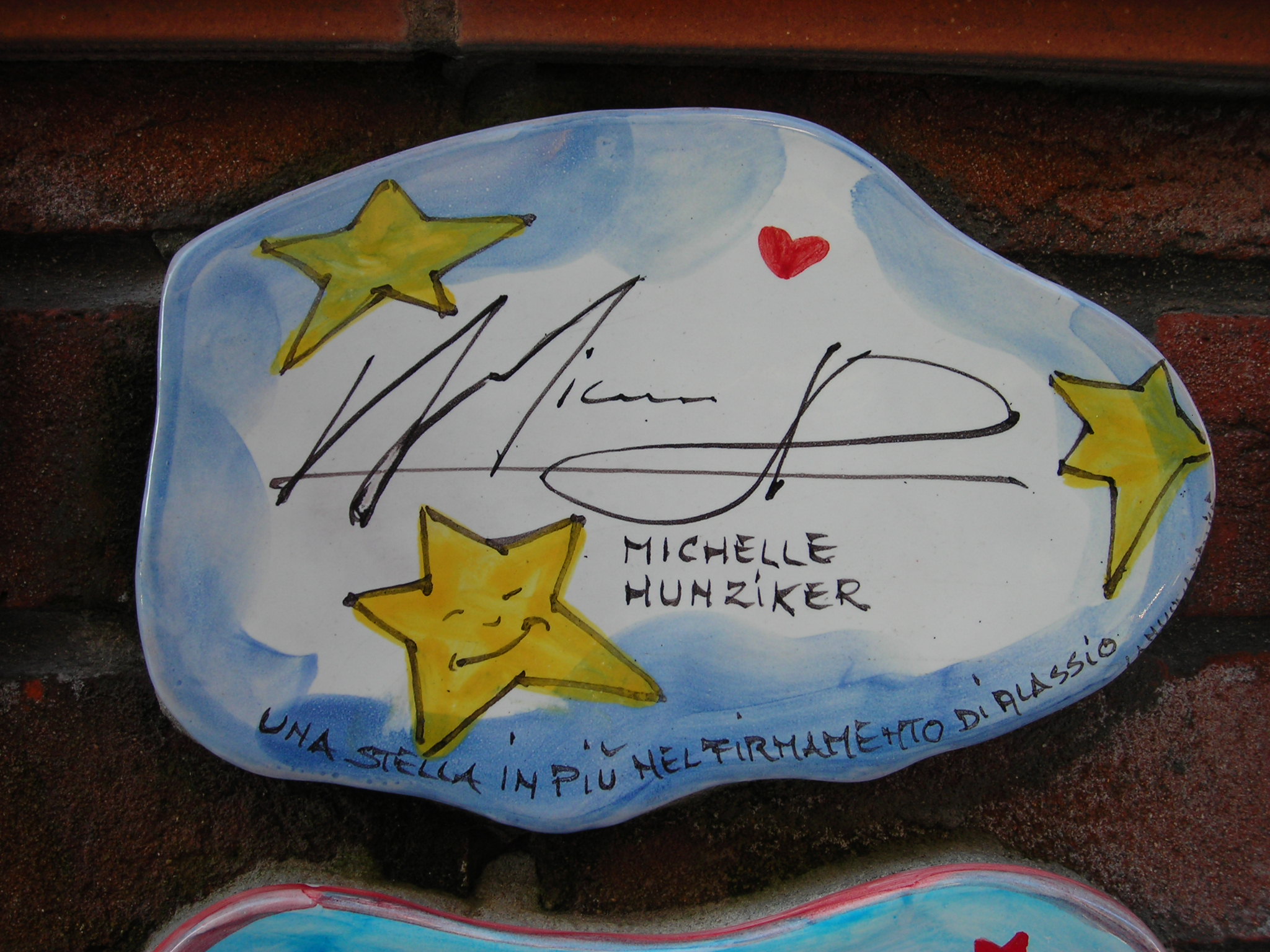 Hunziker was born in Sorengo (Lugano), in the Italian-speaking part of Switzerland. Her mother Ineke is Dutch and her father Rudolf, who died of a heart attack in 2001, was a German-speaking Swiss. He was a painter, but worked as a hotel manager. In 1983, the family moved to Ostermundigen, a suburb of Bern in the German-speaking part of Switzerland. In Ostermundigen Hunziker attended elementary school. After moving to Milan with her mother, she decided to become a fashion model and was hired by Riccardo Gay, a renowned agent. Although considered to be both too heavy and short, at 17 she posed for well-known labels such as Armani, Rocco Barocco, La Perla, Colmar, Fuerte Ventura, Lovable and Swish.

Being Eros Ramazzotti's fiancée, she was discovered by an Italian TV producer. In 1996, she co-hosted the Rai Uno-show I cervelloni with Paolo Bonolis. In summer she presented the prime time comedy show Paperissima Sprint (Canale 5) with Gabibbo. Because of her popularity she hosted the afternoon show Colpo di Fulmine (Italia 1) in 1997. At the same time she wanted to extend her artistic abilities. Therefore, she attended the professional academy M.A.S. in Milan with her choreographer Susanna Beltrami.

In 1998, the Italian film director Vincenzo Verdecchi offered Hunziker her first film role in the TV series La Forza dell'Amore (Canale 5). After she took the female main role in Fammi stare sotto al letto. She can also be seen in the documentary film The Protagonist and in another film, Alex l'Ariete, where she acted with ex ski star Alberto Tomba. Then she co-hosted with Pippo Baudo the Canale 5 show La festa del Disco. From 1999–2001 she presented the late night show Nonsolomoda (Canale 5) where she reported about fashion and lifestyle.

In 1999, TV3, the first Swiss private television station, was founded in Zürich, and Hunziker presented a show called Cinderella, where a hair and make-up artist as well as a styling adviser helped both a prominent person and a viewer of the program to get a new look. After the first episode, Hunziker was caught in the crossfire. The Swiss newspaper Blick even wrote: "Cinderella, TV3's new lifestyle show is not bad. It is catastrophic". Later, Hunziker was interviewed by the Swiss German magazine Schweizer Illustrierte and she said that she could not speak German anymore after having lived in Italy for many years. After TV3 had changed the concept, the show became more popular. A tile of the wall of Alassio, (Italy), autographed by Michelle Hunziker

After having hosted the Swiss show Cinderella, Hunziker was discovered by German TV producers. In 1998, she presented the awarding of the Goldene Kamera with Thomas Gottschalk (a very well known presenter in Germany). A year later, she co-hosted the show Michael Jackson & Friends (ZDF) in Munich. After having attended different talk shows, she presented her first show in Germany: Erstes Glück (SWR/Das Erste). She co-hosted the show with Thomas Elstner and interviewed prominent people about their first love. The show was not very popular though, and was finally suspended. When she got back to Italy, she presented the shows Donna sotto le stelle and Piazza di Spagna (Canale 5) with Gerry Scotti and Tacchi a spillo (Italia 1) with Claudio Lippi. In 2002–2004 she presented with Carsten Spengemann the first and second season of Deutschland sucht den Superstar, the German version of the British TV show Pop Idol.

Hunziker joined ZDF's Wetten, dass..?, Germany's most popular TV show in October 2009. Wetten Dass..? is also being syndicated live on the Austrian ORF and SF1 in her native Switzerland.

In 2006 she released a music album in English, Lole, that was available only in German-speaking countries; the only single off the album was From Noon till Midnight. In it she covered 3 songs of Ira Losco, a Maltese singer. The 3 songs are 'Get Out', 'Someone Else' and 'Love me or Hate me'.

Hunziker co-hosted the Italian comedy shows Zelig (Italia 1) and Scherzi a parte (Canale 5) in 2001. Zelig is one of the most famous Italian TV shows. Later that year, she got the Italian TV Oscar in the category Discovery of the year. Besides, she co-hosted the famous Italian open air music show Festivalbar with Daniele Bossari and Alessia Marcuzzi.

She was married to Italian singer Eros Ramazzotti from 1998 to 2002 and therefore also has Italian citizenship. They separated in 2002 and they have one daughter together, Aurora Sophie (born 5 December 1996). Hunziker announced her engagement to the Trussardi-heir Tomaso Trussardi in 2013, and together they have two daughters, Sole (born 9 Oct 2013) and Celeste (born 8 March 2015).