Michael Anthony Claudio Wincott (born January 21, 1958) is a Canadian actor known for his deep, raspy voice and for being cast in villainous roles.

Some of his better-known roles include Guy of Gisborne in Robin Hood: Prince of Thieves (1991), Top Dollar, the main antagonist in The Crow (1994), music mogul Philo Gant in Strange Days (1995), mercenary Frank Elgyn in Alien: Resurrection (1997) and hacker Adrian Cross on the TV miniseries 24: Live Another Day (2014).

Wincott was born in Toronto and grew up in an east-end suburb. His father was English and his mother was from Piacenza, Italy. Wincott also has two brothers, one of whom is actor and martial artist Jeff Wincott, a star of the late 80s TV series Night Heat.

In a 2014 interview with L'Uomo Vogue (the Italian edition of Men's Vogue) Wincott said he fell in love with cinema as a young child and took drama classes in High School. Wincott was educated at the Victoria University, a college of the University of Toronto then in 1982 he enrolled at the Juilliard School in New York City, graduating in 1986. Wincott credited director Des McAnuff, as well as his father, with encouraging him to enroll at the prestigious acting school.

In 1976 Wincott starred in his first film, titled Earthbound, as Cole Buckley, a troubled teenager living in a small Saskatchewan town. Actors Kate Reid and Gerard Parkes played his parents in the film. The film aired on CBC-TV's Front Row Centre series in January 1977.

After graduating from Juilliard, Wincott was cast in the 1987 film The Sicilian in the role of Corporal Silvestro Canio. That same year he was also cast in the Eric Bogosian play Talk Radio as a stoned heavy metal fan named Kent. The following year Wincott appeared in Oliver Stone's film based on the play. In the 1980s he also appeared on such American TV series as Miami Vice, Crime Story and The Equalizer, as well as Canadian police drama series Night Heat—a series starring his brother Jeff.

Wincott again worked with Oliver Stone in 1989, appearing in the film Born on the Fourth of July as a bedridden Vietnam veteran, then yet again in 1991 in the film The Doors where he played the role of Paul Rothchild, the producer of The Doors' first five albums. In 1991 he also played the part of Guy of Gisborne in Robin Hood: Prince of Thieves, a henchman of the Sheriff of Nottingham (Alan Rickman) who is also the Sheriff's cousin in the film.

In 1993 he appeared in the film Romeo Is Bleeding as Sal, a mafioso, and also played the part of Rochefort in the Disney film The Three Musketeers starring Kiefer Sutherland, Charlie Sheen and Chris O'Donnell. The following year Wincott starred as kingpin Top Dollar opposite Brandon Lee in The Crow. In 1995 he appeared in Dead Man with Johnny Depp. He played poet Rene Ricard in the 1996 biographical film Basquiat. He also played the role of mercenary Frank Elgyn in the 1997 film Alien Resurrection.

Wincott starred as a psychopathic kidnapper opposite Morgan Freeman in the 2001 film Along Came a Spider. The following year he played Armand Dorleac, a sadistic prison warden in the 2002 film version of The Count of Monte Cristo starring Jim Caviezel. In 2004 he played Julius Bicke, the brother of Samuel J. Bicke (played by Sean Penn) in The Assassination of Richard Nixon. In 2006 Wincott appeared in the western film Seraphim Falls starring Pierce Brosnan and Liam Neeson. He also appeared in The Diving Bell and the Butterfly and What Just Happened in 2007 and 2008 respectively.

In 2009 he starred in A Lonely Place for Dying as CIA project manager Anthony Greenglass. In early 2012 he was cast as notorious serial killer Ed Gein in the biographical drama film Hitchcock.

In 2014 Wincott played hacker Adrian Cross in the miniseries 24: Live Another Day. The following year he starred in the Canadian western drama film Forsaken alongside Kiefer and Donald Sutherland. In 2016 he also played the role of Old Bill in two episodes in season 1 of the science fiction western TV series Westworld. 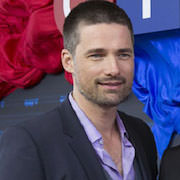