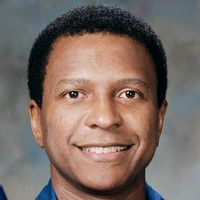 Michael Phillip Anderson (December 25, 1959 – February 1, 2003) was a United States Air Force officer and NASA astronaut. Anderson and his six fellow crew members were killed in the Space Shuttle Columbia disaster when the craft disintegrated during its re-entry into the Earth's atmosphere.

Anderson was born in 1959 to Barbara Anderson and Bobbie Anderson, who serviced jets on Plattsburgh Air Force Base near Plattsburgh, New York. Bobbie Anderson was transferred to Fairchild Air Force Base, about 12 miles away from Spokane, Washington, which Anderson spoke of as his hometown. He was graduated from Cheney High School, one of four African Americans in a class of 200 students.

Upon Anderson's graduation from the University of Washington, he was commissioned a second lieutenant in the U.S. Air Force. After completing a year of technical training at Keesler Air Force Base in Mississippi, he was assigned to Randolph Air Force Base in Texas. At Randolph he served as chief of communication maintenance for the 2015th Communication Squadron and later as director of information system maintenance for the 1920th Information System Group.

In 1986, he was selected to attend Undergraduate Pilot Training at Vance Air Force Base, Oklahoma. Upon graduation he was assigned to the 2d Airborne Command and Control Squadron, Offutt Air Force Base, Nebraska as an EC-135 pilot, flying the Strategic Air Command's airborne command post code-named "Looking Glass." He completed his master's degree while stationed at Offutt.

From January 1991 to September 1992, he served as an aircraft commander and instructor pilot in the 920th Air Refueling Squadron, Wurtsmith Air Force Base, Michigan.

From September 1992 to February 1995 he was assigned as an instructor pilot and tactics officer in the 380th Air Refueling Wing, Plattsburgh Air Force Base, New York.

Anderson had logged more than 3,000 hours of flight time when NASA selected him for astronaut training in December 1994. He was one of 19 candidates selected from a pool of 2,962 applicants.

Anderson reported to the Johnson Space Center in March 1995. He completed a year of training and evaluation, and was qualified for flight crew assignment as a mission specialist. Anderson was initially assigned technical duties in the Flight Support Branch of the Astronaut Office, but went on to log more than 593 hours in space aboard two Space Shuttle missions.

Anderson during the STS-107 mission.

In the fifth and last exchange of a U.S. astronaut, STS-89 delivered Andy Thomas to Mir and returned with David Wolf. The mission's duration was 8 days, 19 hours, and 47 seconds, traveling 3.6 million miles in 138 orbits of the Earth.

STS-107 Space Shuttle Columbia (January 16-February 1, 2003). Anderson served as payload commander and lieutenant colonel in charge of science experiments on the Columbia, NASA's oldest shuttle. On February 1, 2003, the shuttle was returning to Earth after a successful 16-day trip to orbit, where the crew had conducted more than 80 scientific experiments.

Unbeknownst to her crew, the orbiter had suffered critical damage during its launch on January 16, when foam from the fuel tank's insulation fell off and tore a hole in Columbia's left wing. During re-entry, the hole allowed super-hot atmospheric gases to penetrate the orbiter's wing, leading to its destruction. The mission's duration was 15 days, 22 hours, and 20 minutes.

The Columbia Accident Investigation Board reported that, in addition to the Columbia's physical damage, NASA's management culture was partly responsible for the disaster.

Prior to the final launch of the Columbia, Anderson told reporters: "There's always that unknown."

Anderson and his family lived in Houston at the time of his death, where they attended Grace Community Church. Anderson sang tenor in the church's choir.

Sign along Washington State Route 904, commemorating
Lt. Col. Michael P. Anderson.
The contents of this page are sourced from Wikipedia article. The contents are available under the CC BY-SA 4.0 license.
comments so far.
Comments
Trending today in