Christopher Brendan Ward (born September 2, 1975), better known by the stage name MC Chris (stylized as mc chris), is an American nerdcore rapper, voice actor, writer, and improvisational comedian. Associated with the genre of nerdcore hip hop, his trademarks include the high pitch of his voice and the combination of his "geek" heritage with the "gangster" image associated with most hip hop artists. He has released five albums, three EPs, one re-release, and a tenth anniversary edition of his recordings with The Lee Majors.

Ward also had a role in Sealab 2021, as a writer and as the recurring character Hesh Hepplewhite, as well as the twins who play Dolphin Boy in a behind-the-scenes type of episode. He worked as a production assistant and writer for The Brak Show (including the episodes "Brakstreet" and "Shadows of Heat") and voiced a character on the episode "Brakstreet". He was a contributing writer for Space Ghost: Coast to Coast with a cameo in the episode "Baffler Meal", and voiced Ward Willoughby in the 2002 pilot for Welcome to Eltingville.

In October 2004, he announced his resignation from Cartoon Network on his blog to focus on his recording career. He made his return to Adult Swim in the form of a red Gummi bear by the name of Gummi on the show Cheyenne Cinnamon and the Fantabulous Unicorn of Sugar Town Candy Fudge. He will be working on a new cartoon called The mc chris Cartoon, and plans to work in conjunction with the creators of Metalocalypse, although it will not air on Cartoon Network. Since August 2010, he has created the theme songs for several of the SModcast Internet Radio (S.I.R.) programs, including those for the original SModcast, Blow Hard, Bagged & Boarded, and Jay & Silent Bob Get Old.

Ward originally performed with The Lee Majors. While he is one of the artists most closely associated with the genre of nerdcore hip hop, he has been hesitant to accept the nerdcore label for most of his career, preferring to describe his style as "mc chris music" as well as expressing concern over limiting himself to such a narrow audience and subject matter. He has lashed out at the media for focusing more on the nerdcore scene than his music, as well as the nerdcore community as a whole. Despite these issues, he has periodically apologized to those in the nerdcore community for the aforementioned conflicts and has appeared in news stories dealing with nerd culture and nerdcore. Recently, he has done even more than simply apologizing; saying "In the beginning, I felt I was more of an individual and not a part of anything," and further "It's nice that a lot of folks consider me part of it. It's actually embarrassing how I used to think I was the only one playing with 'Star Wars' toys and making music, and it just wasn't true. I have absolutely no problem with the label now." He self-releases with no record label.

In 2012, Ward forcibly ejected a fan from the audience at his show in Philadelphia, Pennsylvania for posting a critical comment on Twitter about Ward's opening act, Richie Branson. After receiving criticism from fans for the incident, Ward apologized in an online video. The fan received a refund, but complained on Reddit that he was humiliated by the experience. 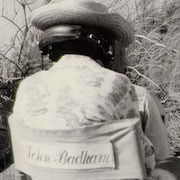