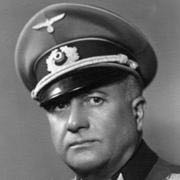 Maximilian Wengler (14 January 1890 – 25 April 1945) was a German general in the Wehrmacht during World War II. He was a recipient of the Knight's Cross of the Iron Cross with Oak Leaves and Swords of Nazi Germany.

Wengler took command of the 83rd Infantry Division on 27 March 1945 in the area of Gotenhafen. The division, after escaping the encirclement of the city, fought its way to Oxhöfter Kämpe and Pillau-Neutief, where Wengler and members of his staff were killed by an aerial bomb on 25 April 1945.

The contents of this page are sourced from Wikipedia article on 08 Mar 2020. The contents are available under the CC BY-SA 4.0 license.
View Maximilian Wengler 's image gallery
Image Gallery
comments so far.
Comments
Trending today in

Honorary doctor and member of the commercial council in Hamburg, Germany

German author and painter of the impressionistic period.