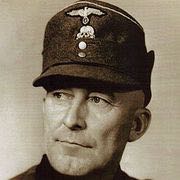 Born in 1893, Matthias Kleinheisterkamp enlisted in the Prussian Army in 1914 and served on both the Western and the Eastern Fronts of World War I. During his service in the war, he was awarded both classes of the Iron Cross and a silver grade Wound Badge. Following the war, Kleinheisterkamp joined the paramilitary group Freikorps and then served in the Reichswehr. He joined the Allgemeine-SS in November 1933, membership number 132,399. He transferred to the SS-Verfügungstruppe on 1 April 1935 and was assigned to the SS training school as an infantry instructor. In 1934, the joined Inspectorate of the SS-VT as a senior staff officer, serving under Paul Hausser.

On 20 April 1937, Kleinheisterkamp joined the NSDAP, membership number 4,158,838. His career stalled when in June 1938 he experienced serious legal and disciplinary troubles. He was reprimanded by the SS Court Main Office and placed on leave until August 1938. Upon his return to active duty, he was assigned to the SS-Standarte Deutschland, which later became the SS Division Das Reich.

With this unit, Kleinheisterkamp took part in the Invasion of Poland, where he commanded the Group Kleinheisterkamp responsible in part for the evacuation of German citizens and diplomatic personnel from Warsaw. In May 1940, he was put in charge of an infantry regiment within the SS Division Totenkopf under the overall command of Theodor Eicke. After Eicke was injured in July 1941, Kleinheisterkamp was, for a short time, commander of the Totenkopf, before being replaced by Georg Keppler. He was then transferred first to SS-Führungshauptamt (SS Leadership Main Office) and later to the SS Division Das Reich.

For his leadership of Das Reich during the operations on Eastern Front, Kleinheisterkamp was awarded the Knight's Cross of the Iron Cross. In June 1942, he took over command of the SS Division Nord, leading the unit until December 1943, when he was transferred to the Waffen-SS reserves. In January 1944, he was assigned to command the VII SS Panzer Corps, III SS Panzer Corps, IV SS Panzer Corps and the XI SS Army Corps.

Kleinheisterkamp was taken prisoner by the Soviet forces on 28 April 1945 near the village of Halbe, south-east of Berlin. He committed suicide a day later while in captivity. Other accounts state he died on 2 May in the Battle of Halbe. Posthumously, Kleinheisterkamp was awarded Oak Leaves to his Knight's Cross.

The contents of this page are sourced from Wikipedia article on 08 Mar 2020. The contents are available under the CC BY-SA 4.0 license.
View Matthias Kleinheisterkamp 's image gallery
Image Gallery

Prince of Waldeck and Pyrmont