Matthew Greenhalgh (born 1972) is an English screenwriter from Manchester, England. He is best known for writing the screenplay to the film Film Stars Don't Die in Liverpool, which earned him a BAFTA Award nomination Best Adapted Screenplay.

Greenhalgh was born in Salford in the Greater Manchester area of England, to Philip Greenhalgh and Rita Greenhalgh (née Roberts). He grew up in Prestwich in North Manchester.

Greenhalgh's film writing debut was a biopic of Joy Division frontman Ian Curtis, the 2007 film Control, which was directed by Anton Corbijn. He was awarded the Carl Foreman BAFTA award at the 61st British Academy Film Awards, and was nominated for Best Screenplay at the British Independent Film Award for his work on the film. Control was adapted from the book, Touching From a Distance, written by Ian Curtis' wife, Deborah Curtis.

Greenhalgh wrote the 2009 film Nowhere Boy, about a young John Lennon, which was directed by Sam Taylor Wood and starred Aaron Johnson. The film was nominated for a BAFTA and a BIFA for Best Screenplay.

He wrote the screenplay for the 2013's The Look of Love, a film about the famous British pornographer Paul Raymond, directed by Michael Winterbottom and starring Steve Coogan and Anna Friel which premiered in Sundance Film Festival 2013 and Berlin Film Festival 2013.

Greenhalgh is married to British television producer Nicola Shindler, with whom he has two daughters and a son. 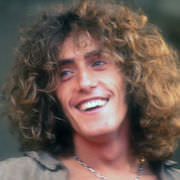 English lead vocalist of The Who

Singer, multi-instrumentalist and producer from England