Maryam Moqadam (Persian: مریم مقدم‎‎, born 1970 in Tehran) is an Iranian actress. Her best-known work film is in the films Jafar Panahi and Kambuzia Partovi's 2013 film Closed Curtain, which premiered at the 63rd Berlin International Film Festival. She was educated at the International School of the Performing Arts in Sweden before making her film debut in Zero Heights in 1994.

Suleiman I of Persia 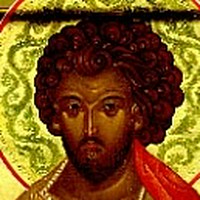 Saint Benjamin the Deacon and Martyr