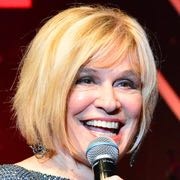 Mary Roos (born Rosemarie Schwab on 9 January 1949) is a German singer and actress.

Schwab was born in Bingen. At the age of nine, she recorded her first song "Ja die Dicken sind ja so gemütlich" as Die kleine Rosemarie. It was no major commercial success. In 1958, she also appeared in the film Die Straße. Over the following years she would release many records and she also appeared in many singing competitions. Her first chart success came in 1965, when the single "Geh nicht den Weg" peaked at #36. In 1969, she took part in the Grand Prix RTL International with the song "Die Legende der Liebe". The same year, she reached the single charts again – "Das hat die Welt noch nicht erlebt" peaked at #19. Her first major was achieved in 1970 with the song "Arizona Man". It peaked at #9 in the single charts and remains her only top ten hit to date. The same year, she took part in the German national final for the Eurovision Song Contest for the first time. She was chosen to take part in the last minute – Edina Pop had to withdraw from the competition as she fell ill and Mary Roos was chosen to sing "Bei jedem Kuss" instead. She finished joint second among the six participants; nevertheless, the song was never recorded.

In the early 1970s, Roos got her own TV show on German television. At the same time, she tried to start a career in France, where she played the lead role in the musical "Un enfant dans la ville" next to Michel Fugain but only had a couple of popular hits with 'L'Autoroute', 'L'Amour Toujours', 'Je C'est I, Tu C'Est You', 'L'Amour En Blue Jean' and 'Les Petits Soldats'. In 1972, she entered the German national final for the Eurovision Song Contest the second time. With her song "Nur die Liebe läßt uns leben" she finished second after the first round of voting only one point behind Cindy & Bert but got the overall victory after the second round of voting. After the reprise of the winning song, she was booed off stage and her victory caused a stir in Germany as she was not the winner of the first round of voting and because of her mediocre vocal performance. In a later interview, she stated that she did not expect to win at all and that she was already removing her make-up when she was called back on stage. However, at the Eurovision Song Contest 1972 in Edinburgh, she finished third. The song was a hit in Germany peaking at #17 in the single charts. Throughout the 1970s she kept releasing singles and albums and was a frequent guest in music shows, although she did not have any more major hits. In 1975, she took part in the German national final again and finished third with "Eine Liebe ist wie ein Lied". Her fourth participation in the national final took place in 1982, where she competed among others against her then husband Werner Böhm. She performed the duet "Lady" with David Hanselmann and finished sixth out of the twelve participants, however, the song was commercially the second most successful one of the year.

In 1984, Roos took part in the German national final for the Eurovision Song Contest for the fifth and last time so far and she sang herself to victory again: "Aufrecht geh'n" narrowly won the ticket to the Eurovision Song Contest 1984. At the contest, the song only received 34 points and finished 13th among the 19 contestants. Mary Roos was blamed for a bad vocal performance which she says was caused by an emotional crisis after her separation from her husband Werner Böhm. "Aufrecht geh'n" would also be her last appearance in the single charts until 1999, when she released a German cover version of Cher's song "Believe" ("Leider lieb ich dich immer noch"). Today, she still has many live concerts and is said to be one of the most-booked singers of the schlager genre. In 1985 Roos covered some C. C. Catch and Modern Talking's songs in German, including You're My Heart, You're My Soul called Ich bin stark, nur mit Dir, I Can Lose My Heart Tonight etc.

From 1981 to 1989, Roos was married to party singer Werner Böhm (known as Gottlieb Wendehals). She is the sister of Tina York, another popular schlager singer in Germany.