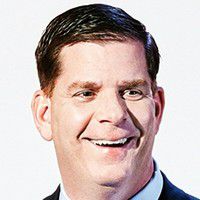 Martin Joseph Walsh (born April 10, 1967) is an American politician from Boston, Massachusetts. A Democrat, he currently serves as the 54th Mayor of Boston, having served in office since 2014. He was previously a member of the Massachusetts House of Representatives, serving in that office from 1997 until 2014 and representing the Thirteenth Suffolk district.

Walsh was born in Dorchester, Boston, to John Walsh, an Irish American originally from Callowfeenish, a townland near Carna, County Galway, and Mary (née O'Malley), from Rosmuc, Co. Galway. The couple emigrated to the United States in the 1950s and gave birth to Marty in 1967. Marty is a fluent Irish speaker.

Walsh grew up in the Savin Hill area of Boston's Dorchester neighborhood. He was diagnosed with Burkitt's lymphoma at age 7, forcing him to miss most of second and third grade and repeat fifth grade. At age 11, after going through years of chemotherapy, a scan revealed no traces of the cancer. He went to high school at The Newman School and received a bachelor's degree from the Woods College of Advancing Studies at Boston College.

Walsh joined the Laborers' Union Local 223 at age 21 and served as the union's president until his election to the Mayoralty of Boston.

He was elected secretary-treasurer and general agent of the Boston Metropolitan District Building Trades Council, a union umbrella group, in the fall of 2010. In 2011, Walsh was named head of the Boston Building Trades, a position that came with a $175,000 yearly salary. Walsh resigned his post when he announced he was running for mayor in 2013.

Walsh was elected to the Massachusetts House of Representatives in 1997. He represented the Thirteenth district of Suffolk County, which includes Dorchester and one precinct in Quincy. He was the Chairman of the Committee on Ethics, and served as a Co-Chair of the Massachusetts Democratic Party Labor Caucus. During his tenure he also served as the co-chair for the Special Commission on Public Construction Reform.

On February 13, 2013, Walsh introduced a bill to have The Modern Lovers song "Roadrunner" be named the official rock song of Massachusetts. The song's writer, Jonathan Richman, came out against this saying, "I don't think the song is good enough to be a Massachusetts song of any kind."

In April 2013, Walsh announced he would run for Mayor of Boston in the 2013 mayoral election. He resigned the Trades Council position in April 2013 after formally announcing his bid for mayor.

Walsh campaigned on the promise to champion a 24-hour Boston, including extending the hours of operation of the "T" into the night. The MBTA answers to the Massachusetts Department of Transportation, which is a state and not city agency, but Walsh campaigned on the promise to extend MBTA service thanks to his tenure in the state house. "As a 16-year veteran of the House," he said, "I am uniquely qualified to negotiate transportation plans with the legislature."

In a speech given on January 25, 2017, Walsh reaffirmed Boston's status as a sanctuary city for people living in the country without documentation. The address was given in the same week that President Donald Trump threatened to pull federal funding to cities that have a policy of protecting illegal immigrants by not prosecuting them for violating federal immigration laws. A defiant Walsh said: "If people want to live here, they'll live here. They can use my office. They can use any office in this building.

Walsh resides in the Lower Mills neighborhood of Dorchester with his long-time girlfriend Lorrie Higgins. He is a recovering alcoholic, with more than twenty years of continuous sobriety in a twelve-step program.

Walsh has been a season ticket holder of American football's New England Patriots since franchise owner Robert Kraft bought the team in 1994.

He is a Roman Catholic.

Walsh has a standing offer out to undocumented minors of Boston, and other local municipalities, for them to sleep in City Hall, or his personal office, the Eagle’s Nest.