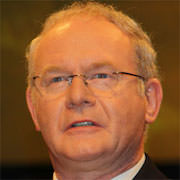 Working alongside US Special Envoy George Mitchell, McGuinness was also one of the main architects of the Good Friday Agreement which formally cemented the Northern Ireland peace process.

On 9 January 2017, McGuinness resigned as deputy First Minister in a protest over the Renewable Heat Incentive scandal. He announced on 19 January that he would not be standing for re-election to the Northern Ireland Assembly in the 2 March 2017 election due to ill health. He reportedly suffered from amyloidosis, a condition that attacks the vital organs, and retired shortly before his death on 21 March 2017, aged 66.

McGuinness acknowledged that he was a former IRA member, but stated that he left the IRA in 1974. He originally joined the Official IRA, unaware of the split at the December 1969 Army Convention, switching to the Provisional IRA soon after. By the start of 1972, at the age of 21, he was second-in-command of the IRA in Derry, a position he held at the time of Bloody Sunday, when 14 civil rights protesters were killed in the city by British soldiers of the 1st Battalion, Parachute Regiment.

During the Saville Inquiry into the events of that day, Paddy Ward stated he had been the leader of the Fianna, the youth wing of the IRA at the time of Bloody Sunday. He said that McGuinness and an anonymous IRA member gave him bomb parts that morning. He said that his organisation intended to attack city centre premises in Derry on the same day. In response, McGuinness said the statements were "fantasy", while Gearóid Ó hEára (formerly Gerry O'Hara), a Derry Sinn Féin councillor, stated that he and not Ward was the Fianna leader at the time.

The inquiry concluded that, although McGuinness was "engaged in paramilitary activity" at the time of Bloody Sunday and had probably been armed with a Thompson submachine gun, there was insufficient evidence to make any finding other than they were "sure that he did not engage in any activity that provided any of the soldiers with any justification for opening fire".

McGuinness negotiated alongside Gerry Adams with the Secretary of State for Northern Ireland, Willie Whitelaw, in 1972. In 1973, he was convicted by the Republic of Ireland's Special Criminal Court, after being arrested near a car containing 250 pounds (110 kg) of explosives and nearly 5,000 rounds of ammunition. He refused to recognise the court, and was sentenced to six months' imprisonment. In court, he declared his membership of the Provisional IRA without equivocation: "We have fought against the killing of our people... I am a member of Óglaigh na hÉireann and very, very proud of it".

After his release, and another conviction in the Republic of Ireland for IRA membership, he became increasingly prominent in Sinn Féin, the political wing of the republican movement. He was in indirect contact with British intelligence during the 1981 hunger strikes, and again in the early 1990s. He was elected to the Northern Ireland Assembly at Stormont in 1982, representing Derry. He was the second candidate elected after John Hume. As with all elected members of Sinn Féin and the SDLP, he did not take up his seat. On 9 December 1982, McGuinness, Gerry Adams and Danny Morrison were banned from entering Great Britain under the Prevention of Terrorism Act by the Home Secretary, William Whitelaw.

In August 1993, he was the subject of a two-part special by The Cook Report, a Central TV investigative documentary series presented by Roger Cook. It accused him of continuing involvement in IRA activity, of attending an interrogation and of encouraging Frank Hegarty, an informer, to return to Derry from a safe house in England. Hegarty's mother Rose appeared on the programme to tell of telephone calls to McGuinness and of Hegarty's subsequent murder. McGuinness denied her account and denounced the programme saying "I have never been in the IRA. I don't have any sway over the IRA".

In 2005, Michael McDowell, the Irish Tánaiste, stated McGuinness, along with Gerry Adams and Martin Ferris, were members of the seven-man IRA Army Council. McGuinness denied this, saying he was no longer an IRA member. Experienced Troubles journalist Peter Taylor presented further apparent evidence of McGuinness's role in the IRA in his documentary Age of Terror, shown in April 2008. In his documentary, Taylor alleges that McGuinness was the head of the IRA's Northern Command and had advance knowledge of the IRA's 1987 Enniskillen bombing, which left 11 civilians dead.

Chief negotiator and Minister of Education

He became Sinn Féin's chief negotiator in the Northern Ireland peace process negotiations which led to the Good Friday Agreement. At the time of his death, former US President Bill Clinton noted that McGuinness was the one who personally oversaw the Agreement's arms decommissioning phase. Former British Prime Minister Tony Blair also acknowledged the leading role which McGuinness had in ensuring the Agreement would be enforced.

He was elected to the Northern Ireland Forum in 1996 representing Foyle. Having contested Foyle unsuccessfully at the 1983, 1987 and 1992 Westminster elections, he became MP for Mid Ulster in 1997 and after the Agreement was concluded, was returned as a member of the Assembly for the same constituency, and nominated by his party for a ministerial position in the power-sharing executive, where he became Minister of Education. One of his controversial acts as Minister of Education was his decision to scrap the 11-plus exam, which he had failed as a child. He was re-elected to the Westminster Parliament in 2001, 2005 and 2010.

In May 2003, transcripts of telephone calls between McGuinness and British officials including Mo Mowlam, the then Secretary of State for Northern Ireland, and Jonathan Powell, Tony Blair's Chief of Staff, were published in a biography of McGuinness entitled From Guns to Government by Kathryn Johnston and Liam Clarke. The tapes had been made by MI5 and the authors of the book were arrested under the Official Secrets Act. The conversations showed an easy and friendly relationship between McGuinness and Powell. He joked with Powell about unionist MPs while Mowlam referred to him as "babe" and discussed her difficulties with Blair. In another transcript, he praised Bill Clinton to Gerry Adams.

In the weeks following the St Andrews Agreement, the four biggest parties—the DUP, Sinn Féin, the UUP and the SDLP—indicated their choice of ministries in the Executive and nominated members to fill them. The Assembly convened on 8 May 2007 and Paisley and McGuinness were nominated as First Minister and deputy First Minister respectively. On 12 May Sinn Féin agreed to take up three places on the Northern Ireland Policing Board, and nominated three MLAs to take them.

On 8 December 2007, while visiting President of the United States George W. Bush in the White House with the Northern Ireland First Minister Ian Paisley, McGuinness said to the press, "Up until the 26 March this year, Ian Paisley and I never had a conversation about anything—not even about the weather—and now we have worked very closely together over the last seven months and there's been no angry words between us.... This shows we are set for a new course."

On 16 September 2011 McGuinness was announced as the Sinn Féin candidate in the 2011 Irish presidential election. In the election held on 27 October, McGuinness placed third in the first preference vote, behind Michael D. Higgins and Seán Gallagher.

McGuinness was the only candidate ineligible to vote in the election as, although an Irish citizen, he was not ordinarily resident in the Republic of Ireland. Following his defeat, McGuinness formally returned to the role of deputy First Minister of Northern Ireland on 31 October.

Resignation from the House of Commons

On 30 December 2012 McGuinness announced that he had formally resigned as the MP for Mid-Ulster stating "I have served formal notice of my resignation from the position of MP for Mid-Ulster with immediate effect. This is in line with my party's commitment to end double jobbing." To do this, he was made Steward of the Manor of Northstead on 2 January 2013 by Chancellor George Osborne, making him an employee of the Crown and thus ineligible for membership of the House of Commons.

In November 2016, a scandal came to light surrounding the Renewable Heat Incentive, an energy incentive championed by Arlene Foster when she was Minister for Enterprise, Trade, and Incentives in 2012. The incentive would cost the Northern Ireland Executive £480m over 20 years, and was marred by allegations of fraud, which were not acknowledged or acted upon by Foster or the DUP. McGuinness and others in Sinn Féin called for Foster (now First Minister) to step aside to allow for independent inquiries, but Foster refused. Foster made a statement before the Assembly on 19 December without McGuinness' approval (as required under the power-sharing agreement), resulting in Sinn Féin and the opposition parties all walking out of the Assembly.

Sinn Féin President Gerry Adams indicated on 8 January 2017 that McGuinness could resign, thus vacating both his and Foster's offices, if Foster did not agree to temporarily step aside to allow an independent inquiry. McGuinness resigned the following day; in his statements to the press, he said "Today is the right time to call a halt to the DUP's arrogance", and said that Foster had a "clear conflict of interest" in the affair. Another reason cited for his resignation was the decision by DUP Minister for Communities Paul Givan to remove £50,000 in funding from the Liofa Gaeltacht Bursary scheme, a yearly programme that allowed 100 school-age children to travel to the Donegal Gaeltacht to learn the Irish language. Sinn Féin refused to nominate a successor to McGuinness before 16 January, resulting in the Secretary of State for Northern Ireland, James Brokenshire, calling for new elections scheduled for 2 March. McGuinness subsequently announced that he would not run for re-election, due to ill health.

One of McGuinness's middle names, Pacelli, is after Pope Pius XII (Eugenio Pacelli).

McGuinness married Bernadette Canning in 1974; they had four children, two girls and two boys. He was a fan of the Derry Gaelic football and hurling teams and played both sports when he was younger. He grew up just 50 metres from Celtic Park, the home of Derry's Gaelic Athletic Association (GAA). His older brother Tom played Gaelic football for Derry and is regarded as one of the county's best ever players. He had three Ulster Senior Football Championship medals, as well as Ulster Under 21 and All-Ireland Under 21 Championship medals. He supported Derry City F.C. where his younger brother Paul played for the Candystripes.

McGuinness supported Manchester United from the age of eight. McGuinness also had an interest in cricket – sometimes extending his support to the England cricket team, as well as that of Ireland.

In March 2019, McGuinness was posthumously awarded a certificate of honour by mayor of San Francisco London Breed for his "courageous service in the military." The nomination had been made by the United Irish Societies who had appointed him honorary marshal in the St. Patrick's Day parade. Breed apologized two days later following controversy.

McGuinness was a member of the Pioneer Total Abstinence Association, which meant that he did not drink alcohol.

In December 2016, McGuinness was advised against making a planned visit to China on medical grounds, initially announcing that this was due to "unforeseen personal circumstances." After subsequent tests, he was told that he was suffering from "a very serious illness." McGuinness and Sinn Féin declined to give details of his illness to the media. In January 2017, The Irish Times disclosed that McGuinness was suffering from amyloidosis, a rare incurable disease that affects organs. McGuinness complained that the Times had breached his privacy and that the paper had inaccurately reported the condition as genetic, thereby causing distress to his loved ones.

On 6 March 2017 McGuinness was hospitalised at Derry's Altnagelvin Area Hospital due to ill health. He died on 21 March, at the age of 66.

The contents of this page are sourced from Wikipedia article on 08 Mar 2020. The contents are available under the CC BY-SA 4.0 license.
View Martin McGuinness 's image gallery
Image Gallery 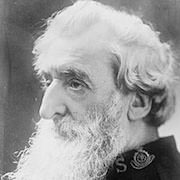