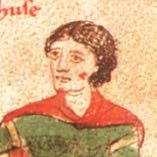 Regent of the Kingdom of Sicily

Markward von Annweiler (died 1202) was Imperial Seneschal and Regent of the Kingdom of Sicily.

Markward was a ministerialis, that is, he came not from the free nobility, but from a class of unfree knights and administrators whose purpose was to serve loyally the Imperial administration in any capacity. During the reign of the Emperor Frederick Barbarossa, Markward became one of the most important figures in the administration.

Markward can be proved at the latest since the Diet of Pentecost. From 1184, Markward served Barbarossa's son Henry VI in Italy. Henry appointed him Margrave of Ancona and Count of Abruzzo, placing him in a highly strategic position in north-central Italy. After the death of Henry, Markward at first supported his widow Constance of Sicily, but later found himself her enemy. He had been excommunicated by Popes Celestine III and Innocent III, who were trying to take over lands in central Italy.

Markward stayed in Italy, and became a supporter of Philip of Swabia, the brother of Henry. Markward's political and military activities caused great problems for the Popes, whose control of Sicily gradually weakened. Two years after Constance's death (1198), Philip gave Markward the lordship of Palermo, where the under-age heir, the future Emperor Frederick II, was resident. Despite the opposition of Innocent III, Markward became Guardian of Frederick II and Regent of Sicily. However, Markward died within a few years.

He was succeeded in Palermo by one William of Capparone.

The contents of this page are sourced from Wikipedia article on 08 Mar 2020. The contents are available under the CC BY-SA 4.0 license.
View Markward von Annweiler 's image gallery
Image Gallery