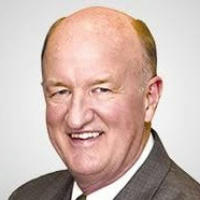 Skousen, like his family, is a devout Mormon. Conservative political commentator and survival strategist Joel Skousen and linguist Royal Skousen are his older brothers, and W. Cleon Skousen, the late conservative author, was his uncle. Skousen and his wife, Jo Ann, and their five children have lived in Washington, D.C.; Nassau, Bahamas; London, England; Orlando, Florida, New York City and Orange, California.

Skousen was an economic analyst for the CIA from 1972 to 1975. He later worked as a consultant for IBM and Hutchinson Technology, and other companies. He was a columnist for Forbes magazine from 1997 to 2001, and has contributed articles to The Wall Street Journal as well as to various libertarian periodicals. He has been a speaker at investment conferences and has lectured for think tanks, From 2008-2010 he was a weekly contributor on CNBC's Kudlow & Company and has also appeared on C-SPAN Book TV and Fox News.

Skousen has been the editor of the Forecasts & Strategies financial newsletter since 1980. He also is the editor of four trading services (Five Star Trader, High-Income Alert, Fast Money Alert, and The 1600 Alert.) and publishes the Investor CAFÉ weekly electronic newsletter.

Mark is the chief proponent of Gross Output (GO), an economic concept used to measure total economic activity in the production of new goods and services in an accounting period. Skousen introduced the concept in his work, The Structure of Production in 1990. Based on Mark's work in this area, the Bureau of Economic Analysis has begun publishing GO in April 2014. The press release and the data are published every quarter along with GDP.

Skousen's books include: The Complete Guide to Financial Privacy (Simon & Schuster, 1983); High Finance on a Low Budget (Bantam, 1981), co-authored with his wife Jo Ann; Economics on Trial (Dow Jones Irwin, 1991); Scrooge Investing (McGraw Hill, 1995); The Making of Modern Economics (M.E. Sharpe, 2001, 2009) named the 2009 Choice Outstanding Academic Title and #2 in the "Top Ten Must Read Books in Economics" by the Ayn Rand Institute; Vienna and Chicago, Friends or Foes? (Capital Press, 2005); The Big Three in Economics (M.E. Sharpe, 2007); EconoPower: How a New Generation of Economists Is Transforming the World (Wiley & Sons, 2008); and the free market textbook Economic Logic (Capital Press, 2000; new fourth edition, 2014). His latest books are "Maxims of Wall Street: A Compilation of Financial Adages, Ancient Proverbs, and Worldly Wisdom" (2011), a collection of famous sayings of Wall Street, and "A Viennese Waltz Down Wall Street" (Laissez Faire Books, 2013), which applies the basic concepts of the Austrian school of Mises, Hayek, and Schumpeter to the investing and high finance.

Skousen served as president of the free market nonprofit Foundation for Economic Education (FEE) from 2001 to 2002.

Skousen's brief tenure as president of FEE ended on a controversial note when he resigned in late 2002 at the request of the organization's Board of Trustees. This move followed Skousen's decision to invite, as keynote speaker for FEE's annual Liberty Banquet, New York City Mayor Rudy Giuliani. Giuliani proved to be an extremely unpopular choice among many of the organization's board members as well as several prominent libertarians.

During his tenure at FEE, Skousen launched a non-partisan, libertarian conference, then titled "FEEFest," which premiered in Las Vegas in 2002. The goal was to bring all think tanks, organizations and people who are concerned about liberty, personal freedom, civil rights, free market principles and economic freedom, to meet and discuss important issues of the day. After Skousen left the presidency at FEE, the conference continued as "FreedomFest," first under the purview of Young America's Foundation, and later, under Skousen's own direction and ownership. The conference has grown to attract thousands of people each year, and focuses on issues of geopolitics and domestic politics, global economics, investing and personal finance, free markets and entrepreneurship, health and healthcare, education, arts and literature, science and technology, history, and philosophy. The conference is popular in the libertarian political movement. FreedomFest also houses the Anthem Film Festival, the world's only libertarian film festival, directed by Jo Ann Skousen.