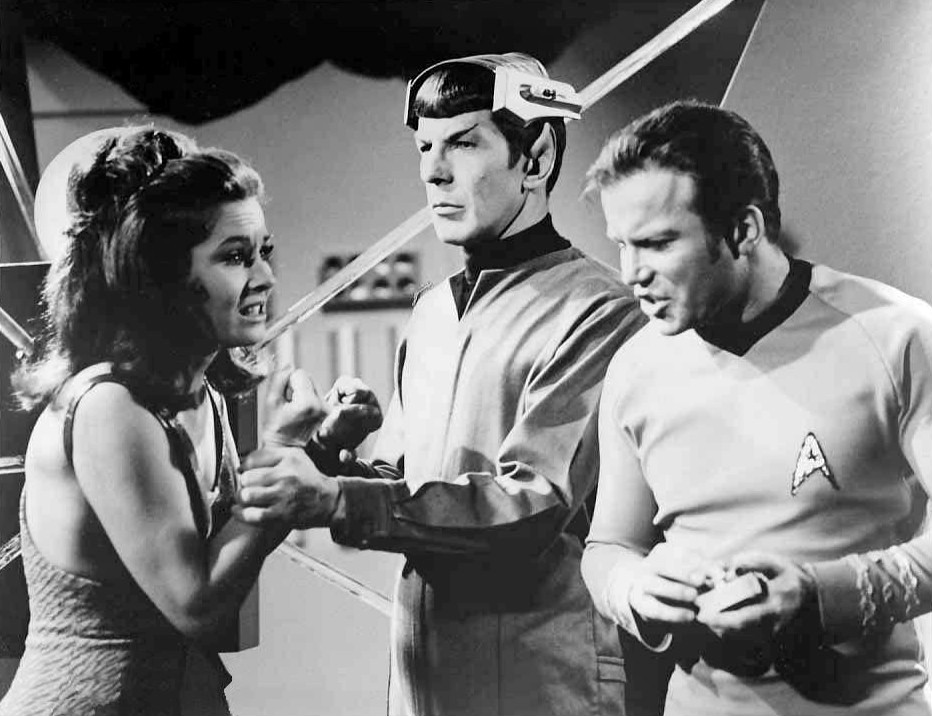 Marj Dusay (/mɑːrdʒ duːˈseɪ/; born Marjorie Ellen Pivonka Mahoney on February 20, 1936, in Russell, Kansas) is an American actress known for her roles on American soap operas. She is especially known for her role as Alexandra Spaulding on Guiding Light, a role she played on and off, from 1993 through the show's 2009 cancellation.

Dusay started her career with a small role as a waitress alongside Elvis Presley in the film Clambake in 1967. In 1968, Dusay played a special agent in the TV series Hawaii Five-O in an episode titled "Twenty-Four Carat Kill", as well as appearing three times as seductive temptresses on Hogan's Heroes.

She made numerous guest appearances on popular television shows in the late 1960s and 1970s. She played alien Kara in "Spock's Brain", the first third-season episode of Star Trek. Dusay is a popular guest at Star Trek fan conventions, often appearing with personal friend and fellow Star Trek actor Michael Dante. She appeared on Daniel Boone in its 1969 episode "Benvenuto... Who?" as a beautiful French diamond thief named Eugenie. She starred as Jean MacArthur in the 1977 film MacArthur, and guest-starred as Blair Warner's mother, Monica Warner, on The Facts of Life. In 1982, she appeared as Kate Hanrahan, a madam/con artist, in several episodes of Bret Maverick, starring James Garner.

Already an established actress when she began her long career on daytime TV, she made her soap debut in April 1983, replacing Carolyn Jones as the powerful Washington, DC, matriarch Myrna Clegg on Capitol, which she played through the final episode in March 1987. As the rival of the kindly Clarissa McCandless (Constance Towers), she had a part in practically every storyline, as well as a steady leading man in veteran film actor Richard Egan. Marj received two Supporting Actress Soap Opera Digest nominations for this part.

She then took over for Shirley Ann Field as the troubled Pamela Pepperidge Capwell Conrad on Santa Barbara from 1987–88 and in 1991. As C.C. Capwell's first wife and Mason Capwell's mother, she also became the mother-in-law to Mason's half-sister, Kelly, who married Pamela's other son, Jeffrey Conrad. A brief affair with C.C. ended badly, causing Pamela to go insane and try to kill Kelly. Her 1991 return had Pamela seemingly recovered, but quickly slipping back into insanity when Mason took her to C.C.'s for a surprise dinner. In 1993, she filled in for Louise Sorel as "Vivian Alamain" on Days of Our Lives while Sorel was on medical leave, having several romantic scenes with veteran actor John Aniston and working with future Guiding Light co-star Crystal Chappell. . After a nationwide search for an actress to take over for the enormously popular Beverlee McKinsey, Marj began as Alexandra Spaulding on Guiding Light in August 1993, remaining on the show until March 1997. She returned for a brief stint from November 1998-February 1999, but could not resist the chance to create her own part.

Marj finally originated a soap role as the evil Vanessa Bennett on All My Children from 1999-2002. As the mother of Dr. David Hayward (Vincent Irizarry, her co-star from Guiding Light) and Leo DuPres (Josh Duhamel), she also became Palmer Cortlandt's last wife, giving her another legendary leading man in James Mitchell. After Vanessa's supposed demise after she was revealed to be a drug lord, Marj was convinced to come back to the show, this time replacing Joan Collins, who left three months into a six-month contract. In late May 2005, Dusay was one of several cast members taken off contract due to budget cuts. The show later asked her to remain with the show on recurring status. Because of her popularity in the role, Marj was given a front-burner storyline in 2006 that had Alexandra marrying a younger man to keep him in the country and scheming to keep him out of a younger woman's bed. While her appearances were greatly reduced after this story ended, she began appearing more upon the return Grant Aleksander (Philip Spaulding) in 2009. CBS announced that Guiding Light was being cancelled on April 1, 2009, with the last show set to air in September. She appeared in Guiding Light's final episode, which aired on September 18, 2009. The character of Alexandra had a "happy ending" when old lover Fletcher Reed came to squire her off on a round-the-world cruise to help her deal with the death of her brother, Alan.

Dusay received a Daytime Emmy Award nomination in 1995 for her work on Guiding Light and was nominated for a special fan award as "America's Favorite Villain" for her performance on All My Children.