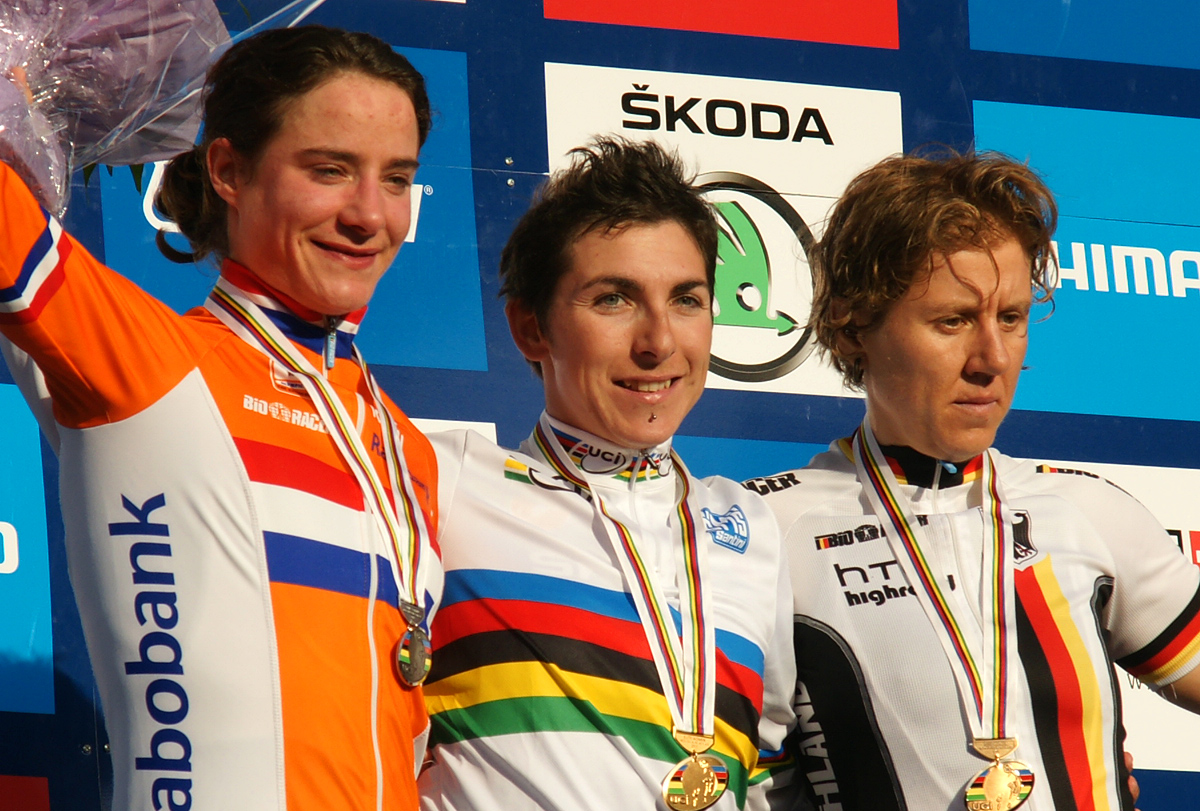 Marianne Vos, ( pronunciation ) (born 13 May 1987) is a Dutch cyclo-cross, road bicycle racer, mountain bike racer and track racer who has drawn comparison to Eddy Merckx as being "the finest cyclist of [her] generation".
After winning a junior European and world championship in road racing, she continued her success in senior cycling by becoming world champion in cyclo-cross and road racing at the age of 19. Vos added track racing world championships when she won the points race in 2008 and the scratch race in 2011. At the 2008 Summer Olympics, she won the gold medal in the points race; at the 2012 Summer Olympics, gold in the women's road race. She is a 3 times World Road Race Champion – in 2006, 2012 and 2013 – and 7 times World Cyclocross Champion – in 2006, 2009, 2010, 2011, 2012, 2013 and 2014.

Marianne Vos was born in 's-Hertogenbosch, North Brabant and lives in the small village of Babyloniënbroek. She started her career when she was six years old after watching her older brother who was already a cyclist. At first she trained with her brother's team as she was not allowed to participate in races; during the winter she started training in cyclo-cross as well. When she was eight, she was able to ride races. Vos also participated in speed skating and inline speed skating. At 14 she replaced inline skating with mountain biking.

Vos excelled in cyclo-cross for the first time in 2004 when she won her first international race in Gieten, beating Birgit Hollmann and Arenda Grimberg. She finished third in the Dutch junior road race and time trial, unable to beat Ellen van Dijk who won both events. Continuing her cyclo-cross season she added wins in Surhuisterveen and Pijnacker-Nootdorp. In the last she beat Hanka Kupfernagel and Daphny van den Brand. For the third straight time she became Dutch junior champion in mountain biking before heading to Verona for the junior road world championship. Aged 17 and a first-year junior, Vos broke away in the final of five laps on the climb. She stayed clear and became world champion. At the end of 2004 Vos was elected Sport FM Sportswoman of the year 2004.

As junior world champion Vos claimed her first Dutch junior national road title in front of 2004 champion Ellen van Dijk. Van Dijk was able to defend her time trial title successfully before Maxime Groenewegen, while Vos finished third again. Participating as a senior at the Dutch cyclo-cross championship Vos finished second behind Daphny van den Brand. She then won her fourth Dutch junior mountain bike title, before winning a junior World Cup meeting in Houffalize. She finished fourth at the world junior cyclo-cross championship and won a race held in Heeswijk a week later. From then on Vos occasionally took part in senior road races. One was the Omloop van Borsele which she won by beating Adrie Visser. Including Vos's world championship in 2004 the Netherlands had won the last three editions of the junior championship (the others being Loes Markerink in 2002 and Suzanne de Goede in 2003). Vos's goal was to add a fourth title by defending her title in Salzburg, but she finished second behind Denmark's Mie Bekker Lacota.

Vos competed in cyclo-cross again. Six weeks after her silver medal in Salzburg she won in Harderwijk and Suameer. Her next aim was the European cyclo-cross championship in Pont-Château, France. She started in the élite field and was expected to assist Daphny van den Brand but instead beat the favourites, including van den Brand who won silver. After the European championship she won two cyclo-crosses in Gieten and Loenhout. Vos was named Sport FM Sportswoman of the year 2005.

Vos won her first race of 2006 on 1 January in Pétange. Less than a week later, the Dutch championship in Huijbergen was again a clash between Vos and van den Brand, this time van den Brand become champion while Vos took silver. Vos then concentrated on the world cyclo-cross championship in her own country, in Zeddam. On 29 January 2006 she was in excellent form, with only Hanka Kupfernagel and Daphny van den Brand able to catch her. Van den Brand changed bikes and lost her lead, finishing one minute behind to take bronze. The gold medal was decided in the last metres when Vos outsprinted Kupfernagel.

During the 2006 road season Vos took part in the Gracia-Orlova Tour in the Czech Republic and won the 5th stage, 2:20 ahead of the pack. In that same week she won the Omloop van Borsele for the second time in a row, beating Vera Koedooder and Bertine Spijkerman. In Spain she took part in the Emakumeen Bira and won the 1st stage. She then travelled back to the Netherlands for the national road championship in Maastricht. Vos cycled in a group containing all the favourites for the race and outsprinted Sharon van Essen and Suzanne de Goede to win the title. On 28 June 2006 Vos was named Dutch Sports Talent of the year 2006 ahead of pentathlete Laurien Hoos and gymnast Epke Zonderland. The additional award was handed to her by former swimming star Erica Terpstra.

A few weeks later she was strongest in the Omloop van Valkenburg where she again finished in front of de Goede. She was still in the junior age category and took part in the European road race championship in Valkenburg. She won the sprint against Italy's Tatiana Guderzo. She went on to win two stages and overall in the Tour Féminin en Limousin. In July, she won criteriums in Steenwijk, Draai van de Kaai, Oostvoorne and Pijnackerow.

In August, she signed a five-year deal with the Dutch Team DSB-Ballast Nedam. It wasn't long before she won her first race with DSB. At the end of the 4th stage of the Trophée d'Or Féminin Vos beat Tanja Schmidt-Hennes.

With the silver medal won in 2005 in mind, Vos returned to Salzburg for the senior road race at the World Championship of road cycling. Vos remained in the bunch until Nicole Cooke started the action in the fifth of six laps. Cooke attacked on the second climb and only Nicole Brändli and Vos were able to catch her. A few others came back a few kilometres later. Judith Arndt left the group by herself. Vos made the jump to Arndt and they led for a few minutes until the chasers came back. From then, the group stayed together apart from attacks on either the flat road or the second climb. The race went to a sprint of 15 riders, Vos taking another rainbow jersey.

Vos won La Flèche Wallonne Féminine and the Rund um die Nürnberger Altstadt World Cup events before going on to win the series overall. She also finished second in the Road Race World Championships, conceding her title to Marta Bastianelli of Italy who broke away in the last 15 km of the race.

Vos added a track cycling world title to her list when she won the Women's Points Race at the 2008 UCI Track Cycling World Championships. In doing so, she became the first woman to have held world championship titles on the road, track and cyclo-cross. Vos became Olympic points race champion at the 2008 Summer Olympics in Beijing.

In 2009, Vos started by winning the Cyclo-cross world championships. She also had success on the road, as she won La Flèche Wallonne Féminine for the third time. Later that year, she finished second in the UCI Road World Championships.

Vos was appointed as a member of the inaugural UCI Athletes' Commission in 2011. Vos during the road race at the 2012 Summer Olympics.

In 2012, Vos won the world cyclo-cross championship again. On the road, she recorded wins at the Ronde van Drenthe and the Trofeo Alfredo Binda, but fractured her collarbone after colliding with a motorcycle during the Valkenburg Hills Classic on 25 May. Although she was still able to finish the race in second place and did not require surgery, she did not resume racing until the Dutch National Championships on 23 June in which she finished second, 3 seconds behind Annemiek van Vleuten. She then raced in the Giro Donne, where for the second year running she won five stages and the general classification. On 29 July she won gold in the London Olympic Games road race winning the sprint from a 3-woman breakaway which formed following the final lap of the Box Hill, Surrey circuit on the return to London. She finished 16th in the time trial. In September, Vos won her second road race world title in Valkenburg, Netherlands after 5 second places in a row (2007–2011). In 2013, Vos started off her year with yet another dominant performance at the 2013 Cyclocross World Championships, winning her fifth World Championship in a row, and her sixth overall. Vos took little time off after her unprecedented fifth consecutive title, winning mountain bike races and then taking her first win at the Ronde van Vlaanderen (Tour of Flanders) by outsprinting Ellen van Dijk On 28 September Vos won another UCI world road race championship after riding away from her challengers on a steep climb in the final lap of the Florence, Italy, course. She finished 15 seconds ahead of the second and third placed riders.

Vos started the year with another world championship in cyclocross. She then won Giro d'Italia Femminile and La Course.

Vos is an ambassador for the Dutch charity Jeugdsportfonds which financially supports children of poor families who want to join a sports club. She is also an ambassador for Youth United for Sri Lanka (YU4SL), set up by young people to help underprivileged people in Sri Lanka. Speed skater Ireen Wüst and other Dutch celebrities joined Vos as ambassadors.