Marcellina was one of the few female Christian leaders in 2nd-century Rome. She came originally from Alexandria, where she learned of Carpocrates. Her movement has been characterized as Gnostic, denying all the worldly laws. The group was most active and influential in the 150s and 160s. They shared everything, including partners, and they displayed images of Greek philosophers alongside icons of Christ. Irenaeus complained in his treatise Against Heresies that Marcellina led the masses down the wrong path. Her supporters branded themselves with a small mark on the back of their right ear. 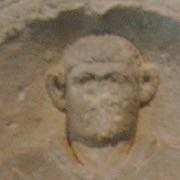