The son of Quebec comedian Gaetan Labrèche, Marc Labrèche had an interest in stage acting from his childhood. His career began in live theatre, but Labrèche's television career started in 1980 when he performed in several television shows and soap-operas including his first TV role in Claude Jasmin's Boogie-woogie 47. His first appearance in a movie was in 1987 when he appeared in If Only.

In total, Labrèche has appeared in more than 30 movies and TV series, including Matusalem, Ding et Dong, La Petite Vie, Monica la mitraille, L'Odysée d'Alice Tremblay and Les Bougon. Labrèche had a leading role in L'Âge des ténèbres directed by Denys Arcand. Labrèche has also performed in the French versions of Toy Story and Toy Story II as Slinky, and on The Simpsons as Krusty the Clown since 1994. Labrèche also hosted the TQS humor show, La Fin du monde est à 7 heures from 1997 to 2000, and wrote and hosted the talk show Le Grand Blond avec un show sournois that aired from 2000 until 2003 on TVA. Since 2006, he has hosted Le Fric Show, a late-night consumer show on SRC.

In 2005 Labrèche's wife Fabienne Dor, daughter of the singer George Dor and mother of his two children, died of cancer. Labrèche was deeply shaken by her death, having taken a brief hiatus from his career to care for her, and has worked with the Canadian Cancer Society several times to help raise awareness of the disease.

In February 2015, Labrèche revealed that he was in a relationship with Jennifer Tremblay, a costume designer for the shows 30 Vies and Ruptures.

In autumn 2016 Labrèche returned to television after a three-year hiatus with the show Info, sexe et mensonges, and will also be appearing in the Bye Bye (a satirical end-of-year show) for 2016.

Labrèche has received several Gemini Awards nominations and awards including for best supporting male interpreter/actor in La Petite Vie in 1993, best host for humour and variety shows in 2000 and 2001, and best male comedy lead in 2006. He also won a Metro Star award in 2002 for best male personality. 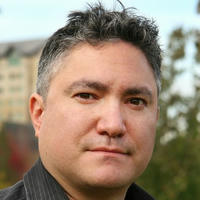