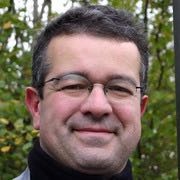 Manuel Andrack (born June 23, 1965 in Cologne) is a German journalist, television show editor, television host and author. He is most well known for his role as the "sidekick" in the popular Harald Schmidt Show.

Manuel Andrack was born on June 23, 1965 in Cologne, where he has also lived most of his life. After receiving his Abitur in 1984 he enrolled at University of Cologne, majoring in theater studies, film, television and German studies with a minor in art history. He received a Magister Artium degree from the same university.

Andrack first worked as an editor for the television production company CAT Entertainment RLT. In 1995 he got a job as the editor-in-chief of the popular Harald Schmidt Show. After August 30, 2000, he also started appearing in the show itself, and became well known throughout the country. His role in the show was Harald Schmidt's "sidekick". The show gained new popularity as the combination Andrack - Schmidt added a family value to the broadcast.

After the show ended in December 2004, Andrack took a "creative break", and wrote a book about hiking (Du musst wandern. Ohne Stock und Hut im deutschen Mittelgebirge., 2005) (In English: You have to hike. Without hiking stick and hat in the German Central Uplands). In this book he describes his hiking experiences. Andrack quit smoking in 1997, and started jogging as a "replacement drug". However, he soon developed knee problems, and had to switch to hiking, falling in love with this outdoors activity. He says he enjoys wandering with friends or with family, but prefers hiking alone. When hiking alone, he usually hikes at least 40 kilometers a day. His favourite hiking route is the Lieserpfad from Daun to Wittlich in the Eifel mountains.

During his creative pause, Andrack also wrote the book Meine Saison mit dem FC about his relationship with the football club 1. FC Köln.

His working life continued when Harald Schmidt made him his chief dramatic adviser, among others for his show Kabarettsprogramm in 2004–2005. When the show was reworked in 2007, Andrack disappeared from the studio, but continued as an editor-in-chief of the program, until his contract was cancelled in mutual agreement in 2008.

In 2008, Andrack moved from Cologne to Saarbrücken. Today, Andrack writes columns and articles about hiking, which are published in Stern, Die Zeit and in Wandermagazin.

The contents of this page are sourced from Wikipedia article on 10 Mar 2020. The contents are available under the CC BY-SA 4.0 license.
View Manuel Andrack 's image gallery
Image Gallery