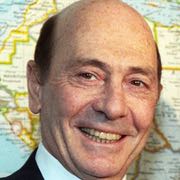 Manfred Hermann Wörner (24 September 1934 in Stuttgart-Bad Cannstatt – 13 August 1994 in Brussels) was a German politician and diplomat. He served as the defense minister of West Germany between 1982 and 1988. He then served as the seventh Secretary General of NATO from 1988 to 1994. His term as Secretary General saw the end of the Cold War and the German reunification. Whilst serving in that position, he was diagnosed with cancer, but, in spite of his illness, continued serving until his final days.

He grew up in his grandfather's house in Stuttgart-Bad Cannstatt and attended the Johannes-Kepler-Gymnasium there. He was married to Elfie Wörner, who was supporting several German army related humanitarian agencies, and who died of a tumor on 4 July 2006.

After graduation in 1953 he studied Law at Heidelberg, Paris, and Munich. He closed his studies 1957 with the first and 1961 the second Staatsexamen. He got his Dr. jur. in 1961 writing about International law. Afterwards he worked for the administration of Baden-Württemberg. He was a county official for Oehringen until 1962, for the Baden-Württemberg Landtag until 1965 and the County Göppingen. Wörner was a jet pilot and reserve officer of the Luftwaffe.

Wörner was a member of the German CDU and was elected to the German parliament, representing Göppingen.

On 4 October 1982 he was appointed Federal Minister of Defence in Helmut Kohl's government. Wörner played an important role in defending NATO's decision to deploy intermediate-range ballistic missiles IRBM after arms reduction talks with the Soviet Union to reverse Soviet deployment of its SS-20 intermediate-range ballistic missiles IRBM from the years before.

In 1983, Wörner faced criticism due to the scandal surrounding German General Günter Kießling. The German military secret service had accused Kießling of being homosexual—this was later revealed to be a case of mistaken identity—and Wörner had ordered Kießling's early retirement, as homosexuality was considered a security risk at the time. Kießling insisted on disciplinary procedures against himself and eventually achieved his reinstatement. Wörner accepted political responsibility for the affair and on 18 May 1984 offered his resignation, which was however rejected by German Chancellor Helmut Kohl.

In December 1987, the sixteen members of NATO elected Wörner Secretary General. He was the first German to be appointed to that position. Resigning from his post in the German government, he took office on 1 July 1988.

An address given by Wörner in 1990 to the Bremer Tabak Collegium became a subject of a controversy when Vladimir Putin cited it in his 2007 speech at 43rd Munich Conference on Security Policy to claim that NATO made a promise not to expand eastward after the end of the Cold War.

Wörner executed his duties as NATO Secretary General despite a severe illness and until his death from Colorectal cancer in 1994. He is buried at the cemetery of Hohenstaufen nearby Göppingen.

Since 1996, the Ministry of Defense has awarded the Manfred Wörner Medal on an annual basis to honour public figures who have rendered "special meritorious service to peace and freedom in Europe".

Since then it was given to:

Wörner Gap on Livingston Island in the South Shetland Islands, Antarctica is named after Dr. Wörner in recognition of his contribution to European unification.