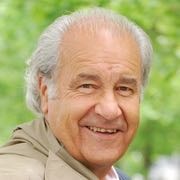 Manfred Schnelldorfer (born 2 May 1943) is a German former figure skater. He is the 1964 Olympic champion, the 1964 World champion, and an eight-time German national champion.

Manfred Schnelldorfer was born on 2 May 1943 in Munich, Bavaria, the son of two figure skating coaches. His father had skated in an ice revue but saw its milieu as a harmful influence.

Manfred Schnelldorfer studied architecture at TH-München but put his studies on hold for financial reasons. A resident of Munich, he is married and has two children.

Schnelldorfer won his first competition at age eight. He was coached by his parents and skated for the Munich ERC club. Internationally, he represented the Federal Republic of Germany (West Germany).

At age 20, he won the gold medal at the 1964 Winter Olympics in Innsbruck, became one of the youngest male figure skating Olympic champions. His victory was a surprise. The favorite was Alain Calmat of France, who won the Europeans between 1962 and 1964 and was silver medalist at the 1963 Worlds.

In all, Schnelldorfer was an eight-time German champion, one-time World champion (1964), three-time bronze and two-time silver medalist at the Europeans.

After his Olympic win, the Ice Capades offered Schnelldorfer a $1.5 million three-year contract but he declined because of a promise to his parents. For two years beginning in 1967, he served as the sports director, officially "national coach", of the Deutsche Eislauf Union. After his parents gave their approval, he performed with the Deutsche Eistheater from 1969 to 1973.

Schnelldorfer was also a pop singer (German: Schlagersänger) and actor before becoming a coach and sport teacher. He was the first West German national coach for figure skating between 1974 and 1981.

Master of the Halepagen Altar