Mahendrasinh Parmar (Gujarati: મહેન્દ્રસિંહ પરમાર) is a Gujarati writer and professor from Gujarat, India. His works includes Polytechnic (2016) and Rakhdu no Kagal (2016). He has also written plays.

He married in 1996 and has two daughters. He lives in Bhavnagar.

Since 2002, his short stories appeared in various collection of Gujarati short stories. He has done numerous shows of public reading of literary works under the title Vachikam.

His critical works published as Pratham in 2009. Polytechnic (2016) is a short story collection while Rakhdu no Kagal (2016) is a collection of his personal essays. He wrote several plays. 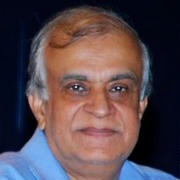