He finished village secondary school after Nariman Narimanov in 1969. He started working for Bodies of Internal Affairs in the Kherson city after he was demobilized from the Army. He was awarded a medal for his distinguished service in the protection of public order during Moscow Olympic Games in 1980.

He later graduated from Special Police School (present Police Academy). He was working as a Head Inspector within the Security Department of Sharur Internal Affairs Department. He was a police captain.

After occupation of the Karki village on the 16th of January, 1990, Armenian forces started moving towards Sadarak District. When the Department of Internal Affairs of Sharur region received the news about this, they sent a group of police officers in order to protect the region and Mahharm Seyidov was also among those policemen. On the January 19, 1990, he was killed when rescuing the commander, Azer Seyidov in the battles for Sadarak.

He was married and had four children.

Maharram Miraziz oglu Seyidov was posthumously awarded the title of the “National Hero of Azerbaijan” by the decree # 831 of the President of Azerbaijan Republic on the 6th of June, 1992. 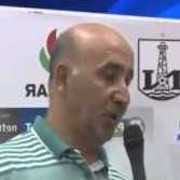