Magnerich of Trier
The basics

Magneric (also called Magnerich, or Magnericus) (born c522, died c596) was a Frankish bishop of Trier, the Franks having seized Trier from Roman administration in 459. In the Middle Ages, the Archbishop-Elector of Trier was an important member of the church, as he controlled land from the French border to the Rhine. The Archbishop-Elector also had great significance as one of the seven electors of the Holy Roman Empire. He is a Catholic and Orthodox saint, with a feast day on July 25. Magneric was one of the first bishops with a Germanic name, and had one of the first Swiss francs on a bishop's throne. He was a friend and admirer of Gregory of Tours, mentioned in his History of the Franks, and ordained St Géry, one of his disciples, who became bishop of Cambrai-Arras on the assent of King Childebert II. Venantius Fortunatus described the Bishop as virtuous and charitable, and an "ornament of bishops".

Magneric was born and grew up in Trier, Germany. Not much is known about his early life. He continued the work begun by his predecessor of restoring the city of Trier and its environs. In his time he founded several clerics communities, among them, St. Eucharius and St. Paulin. He had a great devotion to Saint Martin of Tours, and built several monasteries and churches dedicated to him. He converted the Holy Cross Church in Trier to an oratory in honor of him, which later became the Abbey of St. Martin or the Deumelberg. Other churches he dedicated to him are in Ivois, Carden on the Moselle, and a second one in Trier.

He gave sanctuary to bishop Theodore of Marseilles when he was exiled by Guntramnus of Burgundy in 585, and pleaded with King Childebert II on behalf of the bishop.

He lived in the residence of bishop Nicetius, and accompanied the bishop into exile when Nicetius was banished by King Clotaire I. This was an act of revenge for the King being excommunicated. Magneric returned to Trier the next year. He was ordained by Nicetius in 566.

Magneric was close to the Merovingian royal house and Childebert II, who made him godfather of his son Theudebert II in 586. In 587 he attended a family congress of kings Childebert and Guntram, which nearly cost him his life. Here, the Duke Boso, condemned by the King, fled to his house and took the Bishop hostage. The house was set on fire at the King's command. The proximity to the Merovingian and his influence on the fortunes of Austrasia and the Gallic Church helped him maintain an urban and regional domination until his death.

He was buried in the cemetery of St. Martins. Around the year 1000 Abbot Eberwin wrote a hagiography of the Bishop, whereupon his worship spread throughout Lorraine. In 1506 his grave was opened, and after the destruction of the church his remains disappeared . 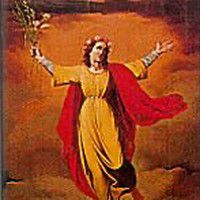 Officer of the Roman general and statesman Julius Caesar

Roman owner of a gladiatorial school that trained Spartacus