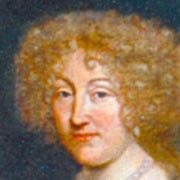 Landgravine Magdalena Sibylla of Hesse-Darmstadt (28 April 1652 – 11 August 1712) was regent of the Duchy of Württemberg from 1677 to 1693, and was a prominent German composer of baroque hymns.

Magdalena Sibylla, Duchess of Württemberg was born in Darmstadt, the daughter of Louis VI, Landgrave of Hesse-Darmstadt and Duchess Maria Elisabeth of Holstein-Gottorp. She was born in Darmstadt. As a child she lost her mother and came into the care of her aunt, the Queen Dowager Hedwig Eleonora of Sweden. In Stockholm, she manifested deep religious beliefs. On the occasion of a visit to the Württemberg crown prince William Louis she became engaged to him. They married on 6 November 1673 in Darmstadt.

Just six months after the ceremony Duke Eberhard III died and her husband Wilhelm Ludwig inherited the throne of Württemberg. In 1677 he, too, died of a heart attack. Thus, the 25-year-old Magdalena Sibylla became reigning Duchess of Württemberg and regent for her minor son Eberhard Ludwig, who would take the throne in 1693, at the age of 16.

Through piety and prudence in all decisions, she enjoyed great popularity. Her religion is reflected in the numerous hymns she wrote, quite a few of which found a permanent place in Protestant hymnals. From 1690 to 1692, she employed the composer Johann Pachelbel. After the accession of the heir apparent, she retreated to Kirchheim castle, where she died.

The contents of this page are sourced from Wikipedia article on 08 Mar 2020. The contents are available under the CC BY-SA 4.0 license.
View Magdalena Sibylla of Hesse-Darmstadt 's image gallery
Image Gallery