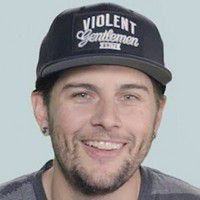 Matthew Charles Sanders (born July 31, 1981), known as M. Shadows, is an American singer, songwriter, and musician. He is best known as the lead vocalist, songwriter, and a founding member of the American heavy metal band Avenged Sevenfold. In 2017, he was voted third in the list of Top 25 Greatest Modern Frontmen by Ultimate Guitar.

M. Shadows was born on July 31, 1981 in Fountain Valley, California and raised in Huntington Beach, California. His interest in rock was from listening to bands like Guns N' Roses earlier in life after his father gave him his first cassette and his interest in heavy metal music grew as he became older and began to play the guitar. He links his early musical experience with the piano as a major factor in developing his skills with the guitar and his voice. He attended Huntington Beach High School, where he played for a brief stint in a punk band named "Successful Failure." Following this, Shadows formed Avenged Sevenfold in 1999 along with middle school friends Zacky Vengeance, The Rev, and Matt Wendt.

Shadows, like the other members of Avenged Sevenfold, uses a stage name. In an interview, Shadows says that he chose his stage name because he thought of himself as "the darker character in the group". The 'M' is in place of his first name, Matthew, which he did not want to be in his stage name because of the way it sounded. He also added that he and the band took stage names because many other successful musicians that they were influenced by had them (e.g. Slash of Guns N' Roses, Munky of Korn and the members of Slipknot). Shadows also mentioned in another interview their reasoning behind choosing stage names also came from their intention to "annoy" people.

Shadows possesses a baritone voice. His vocal style has evolved significantly over the years. On the band's first full-length record, Sounding the Seventh Trumpet, he featured harsh, metalcore-style growls with limited instances of clean vocals. The release of Waking the Fallen in 2003 demonstrated his progression towards melodic vocal lines, but still retained a strong screaming influence. However, the most significant change came with the release of the band's major label debut, City of Evil, in 2005, which featured minimal background screaming, stronger vocal melodies, and increased emphasis on harmonies and melodic hooks. Shadows turned to Ron Anderson, a vocal coach that had previously worked with Axl Rose and Chris Cornell.

Shadows was specifically looking to add a more gritty, raspy tone to his voice and worked with Anderson for several months on this before City of Evil was recorded. This change resulted in newly established vocal contributions from each band member during live performances, and remained prevalent on every record the band has released since 2005.

Rumors were spread that Shadows had lost his ability to scream due to throat surgery needed after Warped Tour 2003. However, producer Andrew Murdock put down these rumors by saying: "When I met the band after Sounding the Seventh Trumpet… Matt handed me the CD, and he said to me, 'This record's screaming. The record we want to make is going to be half-screaming and half-singing. I don't want to scream anymore… the record after that is going to be all singing.'"

During an interview with Stevie Rennie on October 28, 2014, Shadows mentioned that he on purpose had changed his voice to become less raspy and distorted while touring in 2014. The change was due to longer live shows lasting from one and a half to two hours in support of Hail to the King. Shadows went on to say that "you better be taking care of yourself or you're gonna be cancelling shows" and "I wanted to hit notes over the rasps".

Shadows has made guest appearances on numerous albums by various artists. He is featured on the Steel Panther album Feel the Steel and sings a verse of "Turn out the Lights." He also produced The Confession's 2007 album, Requiem, which, according to an interview, M. Shadows was one of the first steps which led to Avenged Sevenfold self-producing their 2007 self-titled album. Shadows also sings In "The River" by Good Charlotte on the album Good Morning Revival along with fellow band member Synyster Gates with his guitar solo. In 2012 Shadows and fellow Avenged Sevenfold member Synyster Gates made a brief cameo in the war game Call of Duty: Black Ops II in which they provided the voice over and motion capture of themselves. Also, in June 2013, Matt competed in the sold out 128-team Call of Duty bracket at MLG Anaheim, placing in the Top 48. The April 2013 release of the band Device's self-titled album featured his vocals throughout track 9, "Haze". Shadows also sang "Nothing to Say" in Slash's self-titled solo album, as well as "Go Alone" in Hell or Highwater's debut album. He was also featured on Fozzy's album Sin and Bones singing alongside Chris Jericho in the song "Sandpaper".

Shadows has also been longtime friends with David Vonderhaar of Treyarch. In July 2019, Shadows was added as a playable character in Call of Duty: Black Ops 4's Blackout battle-royale mode.

Shadows married Valary DiBenedetto on October 17, 2009. The couple have two sons, River who was born in 2012 and Cash, born in 2014. Shadows' bandmate Synyster Gates is married to Valary DiBenedetto's twin sister Michelle DiBenedetto, which makes them brothers-in-law. Shadows' sister is WNBA player Amy Sanders, who is two years younger than he is. He is of Irish and Italian descent.

The contents of this page are sourced from Wikipedia article on 25 May 2020. The contents are available under the CC BY-SA 4.0 license.
View M. Shadows 's image gallery
Image Gallery