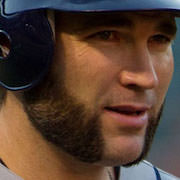 Luke Brandon Scott (born June 25, 1978) is an American former professional baseball designated hitter and left fielder. He played in Major League Baseball (MLB) for the Houston Astros, Baltimore Orioles, and Tampa Bay Rays, and in the Korea Baseball Organization for the SK Wyverns.

Scott attended Oklahoma State University, where he earned All-Big 12 Conference honors on the Oklahoma State Cowboys baseball team. In the summer of 2000, he played for the Falmouth Commodores of the Cape Cod Baseball League, and also played for the Staunton Braves in the Valley Baseball League. He also played baseball at Indian River Community College. Luke spent a winter playing for a Venezuelan League where he earned the nickname "el monstruo de cuadrangular" which translates to "The Home Run Monster". He spent his first professional season in 2001 at home recovering from Tommy John surgery on his elbow joint.

Scott, drafted by the Cleveland Indians in the 9th round of the 2001 Major League Baseball draft and made his professional debut for the Columbus Red Stixx of the South Atlantic League in 2002. He played for the Indians organization through 2003, making stops at Kinston and Akron.

He was traded by the Indians to the Houston Astros for Jeriome Robertson before the 2004 season. He made his Major League debut on April 5, 2005 against the St. Louis Cardinals, and was hitless in three at-bats in that game. His first hit was a triple to centerfield off Ramón Ortiz of the Cincinnati Reds on April 8, 2005. He appeared in 34 games that season, hitting .188.

Scott became the first Astros' rookie to hit for the cycle, accomplishing an "unnatural cycle" (home run, triple, double, and single, in that order) on July 28, 2006. That feat also marked Scott's first career home run, off Enrique González. After the completion of the 2007 season Scott headed to Venezuela to play another season in the Winter League, where he earned Winter League all-star honors.

Scott with the Baltimore Orioles in 2011.

Scott was traded to the Orioles with Matt Albers, Troy Patton, Dennis Sarfate and Mike Costanzo for Miguel Tejada during the 2007–2008 off-season.

On July 7, 2009, Scott had a career high seven RBIs against the Seattle Mariners, going 3-4 with a single, triple, and home run. After Aubrey Huff was dealt to the Detroit Tigers in August 2009, the Orioles starting using Scott as an occasional 1st baseman. Scott was named Most Valuable Oriole for the 2010 season.

He was placed on the 15-day DL on March 31, 2013. On April 30, Scott was activated from the disabled list, and Shelley Duncan, who had been getting most of the time at designated hitter in Scott's absence, was designated for assignment to make room on the roster. On August 17, Scott was placed on the disabled list with back spasms. After his return on September 1, he was used mostly off the bench. His best month was July, where in 20 games, he hit .284 with 4 HR and 11 RBI. In 91 games in 2013, including a team-leading 61 starts at designated hitter, he hit .241 with 9 HR and 40 RBI.

He signed with the Pericos de Puebla of the Mexican League for 2015. He played in 28 games with them, hitting .292 with seven homers and 27 RBI.

Scott signed with the Toronto Blue Jays on a minor league deal on May 15, 2015, and was assigned to the Triple-A Buffalo Bisons. He was released on August 13.

Scott enjoys hunting and is a firearms enthusiast. He is a supporter of greater personal responsibility and smaller government.

In 2010, during the dispute regarding President Obama's birth certificate, Scott said that Obama was not born in the United States. Scott added: "I was born here. If someone accuses me of not being born here, I can go – within 10 minutes – to my filing cabinet and I can pick up my real birth certificate and I can go, 'See? Look! Here it is. Here it is.' The man has dodged everything. He dodges questions, he doesn't answer anything. And why? Because he's hiding something."