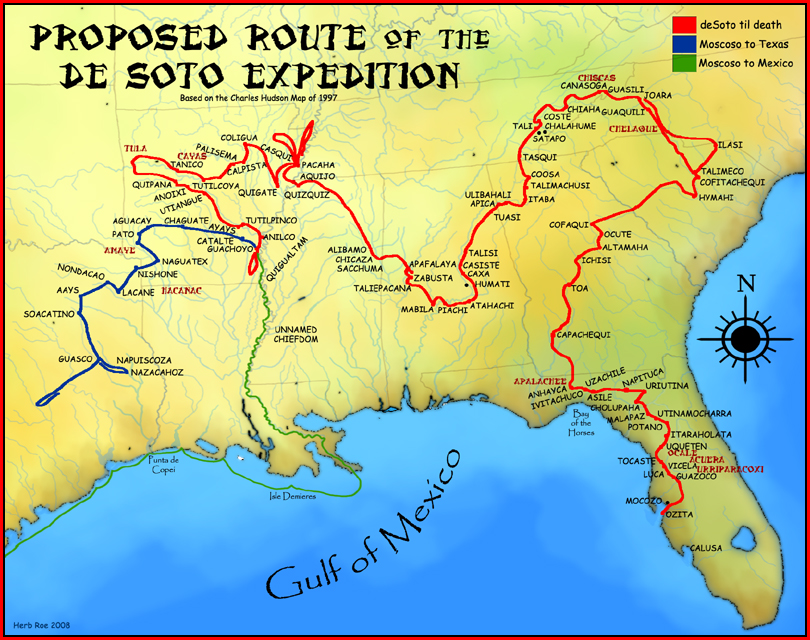 Luis de Moscoso Alvarado (1505 in Badajoz (Spain) – 1551 in Peru) was a Spanish explorer and conquistador.

Luis de Moscoso Alvarado was born in Badajoz, Spain in 1505. He was the son of Alonso Hernández Diosdado Mosquera de Moscoso and Isabel de Alvarado. Luis had 2 brothers, Juan de Alvarado and Cristóbal de Mosquera. His uncle was the Spanish conquistador Pedro de Alvarado, who had excelled in the conquests of Mexico and Central America.

Alvarado accompanied his uncle on expeditions to the Americas, where he participated in the conquest of present-day Mexico, Guatemala and El Salvador. In 1530 Pedro sent Alvarado to set up a colony in present-day eastern El Salvador. On May 8, 1530 Alvarado founded the town of San Miguel de la Frontera in modern San Miguel Department.

In 1534, he traveled to Peru with his uncle on an expedition through what is now Ecuador. As Alvarado explored the area, he and Pedro discovered several tribes in the Manabí Province.

A proposed route for the de Soto and de Moscoso Expedition, based on Charles M. Hudson map of 1997.

After returning to Peru, Alvarado and his two brothers decided to work with Spanish explorer Hernando de Soto.

Alvarado returned to Spain in 1536 due to discord between Diego de Almagro and Francisco Pizarro. In Spain, apparently, Alvarado made improper use of the wealth he had acquired in Peru, forcing his return to the Americas to recover it. He left the Spanish port of Sanlucar de Barrameda with de Soto's army, commanding one of the expedition's seven ships.

On April 7, 1538 the expedition reached Florida's coast via Cuba. Alvarado obtained the title of "maestro de campo" (field commander) and kept this title until an incident with the Chickasaw Native American band, in March 1541. In this incident many of the horses and twelve Spaniards died, apparently (and mainly) because of Alvarado's error. De Soto died on May 21, 1542, in what became Arkansas, leaving Moscoso as the commander of the army. Moscoso decided to withdraw and return to Spain with his men.

Moscoso and his army marched west, possibly reaching northwest Louisiana and Texas. They encountered indigenous peoples, but lacked interpreters to communicate with them. This circumstance and poor weather forced the group back to the Mississippi River.

There they built seven bergantines, or pinnaces, with which to seek a water route to Mexico. On July 2, 1543, the 322 survivors of the original 600 soldiers and servants went down the Mississippi. Alvarado's expeditionary group sailed to the Pánuco River, crossing the Louisiana and Texas shores. The group probably also found some of Texas' bays (possibly Matagorda Bay, Corpus Christi Bay or Aransas Bay). From this river the army traveled to Mexico City.

There Moscoso wrote two brief dispatches to the king of Castile at the time, Charles V, although they explained little about the expedition. In present-day Mexico he served to the viceroy of New Spain Antonio de Mendoza and accompanied him to Peru in 1550, where Luis Moscoso died in 1551.

After sending the letters to the King of Spain, Moscoso Alvarado married his cousin, Leonor (the daughter of his uncle Pedro de Alvarado) in Mexico City.