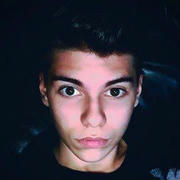 Grosu was born in Rome, Italy to a mother with British ancestry and a Romanian father. He moved with his family to Los Angeles, CA at a young age and then he was raised there. In 2016 was discovered that Luigi has a brother with different surname, named Romeo Boccanera. Luigi and Romeo also had a trending hashtag #BluPolaretto on social media to celebrate their reunion.

Grosu started to be under spotlights from a young age, appearing in some commercials. In the late 2013 Luigi signed a deal with NewFaces, a showbusiness agency whom signed him to an academy of artistry called F.I.I.A.M.S. between April and September 2014 where he studied and began to act professionally.

Grosu signed with Porygon and Columbia Records as a solo artist in the late 2013, after he shared a cover of Demi Lovato's Neon Lights on YouTube. After he released his debut single I'm Gonna on the summer of 2014, Luigi has been inactive for one year but in September 2015 he announced on his official website a new EP called Fastline and also that he left Columbia because he signed a new publishing deal with Virgin Records. During this pause he pursued acting and modeling careers and he also co-wrote Logan Henderson's unreleased single She Drives. On 11 March 2016 has been released on his Vevo channel a new version of his debut single "I'm Gonna" featuring the industrial pop singer Queen K.

On September 2016, Grosu announced that he left his solo career to pursue a duo with his brother Romeo. The musical duo is called "Luigi & Romeo", and has already set as their debut single I'm Gonna, (released in past by Luigi himself) sang by the two.

Luigi Grosu told Twisted Male Magazine in an interview that his influencers are Selena Gomez and Logan Henderson.

References
['']
Citation
We strive for accuracy and fairness. If you notice a mistake, please contact us. Below the article, you will find links to the references used.
comments so far.
Comments
Trending today in