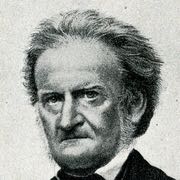 Ludwig Döderlein was born at Jena. His father was Johann Christoph Döderlein, professor of theology at Jena. After receiving his preliminary education at Windsheim and Schulpforta (Pforta), he studied at Munich, Heidelberg, Erlangen and Berlin. He devoted his chief attention to philology under the instruction of such men as F. Thiersch, G. F. Creuzer, J. H. Voss, F. A. Wolf, August Boeckh and P. K. Buttmann.

Döderlein's most elaborate work as a philologist was marred by over-subtlety, and lacked method and clearness. He is best known by his Lateinische Synonymen und Etymologien (1826-1838), and his Homerisches Glossarium (1850-1858). To the same class belong his Lateinische Wortbildung (1838), Handbuch der lateinischen Synonymik (1839), and the Handbuch der lateinischen Etymologie (1841), besides various works of a more elementary kind intended for the use of schools and gymnasia. Most of the works named have been translated into English.