Ludwig Bemelmans (April 26, 1898 – October 1, 1962) was an Austrian-born American writer and illustrator of children's books. He is known best for the Madeline picture books. Six were published since 1939.

Bemelmans was born to the Belgian painter Lambert Bemelmans and the German Frances Fischer in Meran, Austria-Hungary (now Italy). His father owned a hotel. He grew up in Gmunden on the Traunsee in Upper Austria. His first language was French and his second German.

In 1904, his father left his wife and Ludwig’s governess, both of whom were pregnant with his child, for another woman, after which his mother took Ludwig and his brother to her native city of Regensburg, Germany. Bemelmans had difficulty in school, as he hated the German style of discipline. He was apprenticed to his uncle Hans Bemelmans at a hotel in Austria. In a 1941 New York Times interview with Robert van Gelder, he related that while an apprentice, he was regularly beaten and even whipped by the headwaiter. According to Bemelmans, he finally warned the headwaiter that if he was whipped again he would retaliate with a gun. The headwaiter ignored his warning, whipped him, and Bemelmans reportedly shot and seriously wounded him in retaliation. Given the choice between reform school and emigration to the United States, he chose the latter. It is likely this was one of Bemelman’s famous yarns, since in John Bemelmans Marciano’s biography of his grandfather, he relates a simpler story: recognizing that Ludwig was an incorrigible boy, his uncle offered him the choice of going to America (where his father now lived), or going to reform school.

He spent the next several years working at hotels and restaurants in the US. In 1917, he joined the U.S. Army but was not sent to Europe because of his German origins. He did became an officer, and was promoted to Second Lieutenant. He writes of his experiences in the Army in the book, My War With the United States. In 1918, he became a US citizen.

In the 1920s, Bemelemans tried to become an artist and painter while working at hotels, but had substantial difficulties. In 1926, he quit his job at the Ritz Carlton in New York to become a full time cartoonist. His cartoon series The Thrilling Adventures of the Count Bric a Brac was dropped from the New York World after six months. He associated with Ervine Metzl, a commercial artist and illustrator who is variously described as Bemelmans's friend, "agent", and "ghost artist".

In the early 1930s Bemelmans met May Massee, the children's book editor at Viking Press, who became a sort of partner. He began to publish children's books, beginning with Hansi in 1934. He published the first Madeline book in 1939; after being rejected by Viking, it was published by Simon & Schuster. The book was a great success. Bemelmans did not write a second Madeline book until 1953, when he published Madeline’s Rescue. Four more books in the series were subsequently published while he was alive, and one more was published posthumously in 1999.

Up until the early 1950s, the artistic media he worked in were pen and ink, water color, and gouache. As he describes in his autobiographical My Life in Art, he had avoided oil painting because it did not permit him to produce artistic pieces quickly. But at this point in his life, he wanted to master the richness of oil painting. To this end, he set out to buy a property in Paris that would serve as a serious, full-blown art studio. In 1953, he fell in love with a small bistro in Paris, La Colombe [fr] in the Ile de la Cité, and bought it, intending to convert it into a studio. He painted murals therein, but the project was a disaster owing to French bureaucracy, and after two years of frustration and disappointment, he unloaded it by selling it to Michel Valette, who converted it into a notable cabaret.

Bemelmans also wrote a number of adult books, including travel, humorous works and novels, as well as movie scripts. The latter included Yolanda and the Thief. While spending time in Hollywood, he became a close friend of interior decorator Elsie de Wolfe, Lady Mendl.

A mural on the walls of the Carlyle Hotel's Bemelmans Bar in New York City, Central Park, is his only artwork on display to the public. He painted the children's dining room on Aristotle Onassis's yacht Christina (now the Christina O), for the young daughter of the magnate, Christina Onassis.

Each Madeline story begins: "In an old house in Paris, that was covered with vines, lived twelve little girls in two straight lines... the smallest one was Madeline." The girls are cared for by Miss Clavel. She is likely a nun, as some French orders called themselves Madames, particularly that of St. Madeleine Sophie Barat, after which this convent school seems to be modeled; and "Mrs." would not be an appropriate equivalent in English. Some have argued that Miss Clavel's apparel looks more like that of a nurse (although why a nurse is working in what appears to be a Paris convent school is not explained).

Other characters include Pepito, son of the Spanish ambassador, who lives next door; Lord Cucuface, owner of the house; and Genevieve, a dog who rescues Madeline from drowning in the second book. Bemelmans published six Madeline stories in his lifetime, five as picture books and one in a magazine. A seventh was discovered after his death and published posthumously:

Bemelmans is said to have met his future wife, Madeleine "Mimi" Freund, as a model in Metzl's studio. They had one daughter, Barbara, and three grandchildren, Paul Marciano, James Marciano, and John Bemelmans Marciano.

Bemelmans died in New York of pancreatic cancer, aged 64 and was buried in Arlington National Cemetery.

The contents of this page are sourced from Wikipedia article on 09 Mar 2020. The contents are available under the CC BY-SA 4.0 license.
View Ludwig Bemelmans 's image gallery
Image Gallery 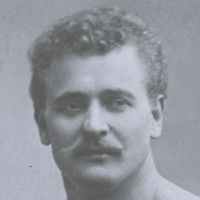