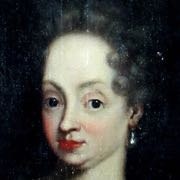 Louise of Mecklenburg-Güstrow Queen consort of Denmark and Norway

Louise of Mecklenburg-Güstrow (28 August 1667 – 15 March 1721) was Queen consort of Denmark and Norway as the first spouse of the King Frederick IV of Denmark. In 1708–09, she was regent during her husband's trip to Italy.

Louise was born in Güstrow in the family of Duke Gustav Adolph of Mecklenburg-Güstrow and Magdalene Sibylle of Holstein-Gottorp as a great-great-granddaughter of Frederick II of Denmark. Louise grew up into a tiny court characterized by pietistic feelings and rigid religiosity, led by her father, who wrote religious songs in pietistic spirit.

In 1695, Louise was selected by Crown Prince Frederick as his bride. When it was deemed time for Frederick to marry and provide and heir to the throne, he was sent to a journey to Germany to choose a bride from some of the Protestant Princely houses. When he reached Güstrow, he choose Louise because of her beauty, and his choice was wholeheartedly accepted as suitable from both the danish royal house as well as from her family. He reportedly also expected her to accept any potential adultery from his side without protests.

On 5 December 1695, Louise married Crown Prince Frederik in Güstrow followed by their formal entry in to Copenhagen. Initially, the marriage was described as happy; Louise reciprocated Frederick's attraction, and the french ambassador noted: "The crown princess loves her spouse intensely, and he lives with her in complete bliss". Their children who reached maturity were King Christian VI of Denmark and Princess Charlotte Amalie of Denmark.

Unlike Frederick IV, she never gained popularity with the population. Louise figured in her role as queen at official ceremonies, but was otherwise ignored at court, and her isolated and quiet life has made her less known in history. The official mistresses and wives by bigamy of the king where given their own titles, residences and courts, and their houses where frequented by the king and thereby by the nobility, while Queen Louise was ignored and deprived of her role as the female center in court life which her rank would otherwise have entitled her. Her social isolation became particularly severe after the king's second bigamy with Anna Sophie Reventlow in 1712, and during her last nine years her life was described as a shadow, while she only appeared at the king's side in official ceremonies where the presence of the queen was demanded by etiquette.

Louise suffered because of her husband's infidelity. It is mentioned that she caused embarrassing scenes at court during Frederick's affairs and that she had a bad temperament. Her jealousy attracted great attention, and it was said that Frederick could not enter her rooms without Louise beginning to "cry, raise and walk about like a furie", which caused him to leave in anger, after which she "walked about for three or four hours, turning her hands and crying copiously."

Queen Louise was strongly influenced by Pietism, and she sought solace in religion. Her main interest was reading religious books. Her collection of 400 books, which was donated to the royal library after her death, was mainly composed of ascetic religious literature in German. After her death, her interest in religion was praised by the clergy, who compared her with the legendary Queen Esther and referred to her as a saint. Louise was close to her son Christian, who was deeply influenced by her religious devotion and swore to avenge the sorrow his father's second bigamy with Anna Sophie Reventlow caused his mother on Reventlow, a promise he did keep after the death of his father.

Very little is known about Louise, her interests and personality, because of her reclusive lifestyle, other than her jealousy over her husband's adultery and her religious devotions. She did own a couple of estates as part of her dower as queen, notably Hørsholm, but does not appear to have taken any interest in them.

She died in Copenhagen and was buried in the Roskilde Cathedral.

The contents of this page are sourced from Wikipedia article on 08 Mar 2020. The contents are available under the CC BY-SA 4.0 license.
View Louise of Mecklenburg-Güstrow 's image gallery
Image Gallery