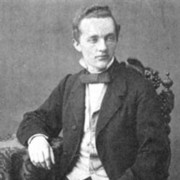 Louis Paulsen (15 January 1833 in Gut Nassengrund near Blomberg, Principality of Lippe – 18 August 1891) was a German chess player. In the 1860s and 1870s, he was among the top five players in the world. He was a younger brother of Wilfried Paulsen.

Paulsen was one of the first players to challenge the notion that an attack could be constructed out of brilliance. He put forward the idea that any brilliant attack would have failed against correct defence. His ideas were grasped by Wilhelm Steinitz, who declared that attack and defence have equal status, and particularly by Aron Nimzowitsch, who listed Paulsen among his six greatest "purely defensive players". Paul Morphy and Paulsen were early masters of the game and of blindfold chess; they were capable of playing 10 blindfold games at the same time without any major errors. In 1862 Paulsen challenged Adolf Anderssen for the world championship. The eight-game match was a tie and Anderssen remained an unofficial world champion. Paulsen defeated Anderssen in matches in 1876 and 1877.

Paulsen pawns is a term coined by Nimzowitsch for a restricted pawn centre with two pawns on squares d6 and e6 for Black or d3 and e3 for White, often coupled with an open c-file. This restricted centre makes it difficult for the opponent to whip up a quick attack by advancing his centre. Paulsen pawns are the stalwart of the Paulsen Variation of the Sicilian Defence.

The modern form of the Dragon was originated by Paulsen around 1880. It was played frequently by Henry Bird that decade, then received general acceptance around 1900. In chess, the Dragon Variation is one of the main lines of the Sicilian Defence and begins with the moves:

A less famous variation in the Sicilian Defence is the Paulsen Variation. The line goes as follows:

Paulsen Attack in the Scotch Game

Paulsen Variation in the Vienna Game

After 1.e4 e5 2.Nc3 Nc6, the move 3.g3 is known as the Paulsen Variation in the Vienna Game. Paulsen played the move five times in the Vienna 1873 chess tournament.

The contents of this page are sourced from Wikipedia article on 08 Mar 2020. The contents are available under the CC BY-SA 4.0 license.
View Louis Paulsen 's image gallery
Image Gallery