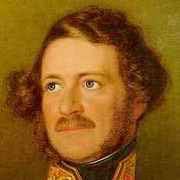 Louis of Oettingen-Wallerstein
The basics

Born at Wallerstein, his mother was Wilhelmine Friederike (1764-1817), a daughter of Louis Eugene, Duke of Württemberg. He succeeded his father as ruling Prince of Wallerstein in 1802 but lost his sovereignty in 1806 due to Mediatisation.

In 1823 he married Maria Crescentia Bourgin (1806–1853) in a morganatic marriage, thus being stripped of his headship of the House, and after her death he married Countess Albertine Larisch von Moennich. A passionate art collector, he spent almost all of his money on artworks and in 1862 had to move to Switzerland after being arrested on the request of his creditors. He died at Lucerne in 1870.

The contents of this page are sourced from Wikipedia article on 09 Mar 2020. The contents are available under the CC BY-SA 4.0 license.
View Louis of Oettingen-Wallerstein 's image gallery
Image Gallery