Jourdan was born Louis Robert Gendre in Marseille, France, in 1921, one of three sons of Yvonne (née Jourdan) and Henry Gendre, a hotel owner. He was educated in France, Turkey, and the UK, and studied acting at the École Dramatique. While there, he began acting on the professional stage, where he was brought to the attention of director Marc Allégret, who hired him to work as an assistant camera operator on Entrée des Artistes (The Curtain Rises).

Allegret then cast Jourdan in what should have been his first movie, Le Corsaire in 1939 opposite Charles Boyer. Filming was interrupted by the Second World War and was never resumed.

Jourdan was too young for army service and was hired by Marcel L'Herbier to appear in La Comédie du bonheur (1940) in Rome. He was making Untel Père et Fils in that city when Italy declared war on France. He returned to France, and appeared in Premier rendez-vous (1941) with Danielle Darrieux, shot in Paris. He spent a year on a work gang. Jourdan was ordered to make German propaganda films, which he refused to do, and fled to join his family in unoccupied France.

His father was arrested by the Gestapo; months later he escaped, and joined the French Resistance, along with his family. "I was given work to do and I did it", said Jourdan later of his time in the resistance. "I worked on illegal leaflets, helping to print and distribute them." After the liberation of France in 1945, he returned to Paris with his childhood sweetheart, Berthe Frédérique (nicknamed "Quique").

Cited by author James McKay as the "epitome of the suave Continental", Jourdan was spotted in a French film by a talent scout working for David O. Selznick, who offered the actor a contract in March 1946.

His first American film was The Paradine Case (1947) starring Gregory Peck. The movie is a drama directed by Alfred Hitchcock, who did not want Jourdan cast as the valet in the film. He appeared in a theatre production of Ghosts in Los Angeles.

Jourdan frequently argued with Selznick, who put him on suspension a number of times for refusing roles.

Selznick announced Jourdan and Alida Valli for Rupert of Hentzau but the film was not made. Neither was Trilby which Selznick said Jourdan would appear in with Valli and Rossano Brazzi or If This Be My Heart with Valli and Robert Mitchum.

With Joan Fontaine, Jourdan starred in the Max Ophüls film Letter from an Unknown Woman (1948). David Thomson in 2010 observed how his performance as Stefan Brand altered as the character aged over the extended period of the film's narrative: "I notice how his way of talking has changed. The younger Stefan was boyish, eager and open. Ten years later, the man is filled with self-loathing and fake ironies." It was a "signature performance" from Jourdan, Thomson wrote in Have You Seen?, he was "handsome yet a touch empty; romantic yet not entirely there." John Houseman, the film's producer, "felt he lacked sex appeal, but that shortcoming serves very well as his defect of memory," a significant element of the film's plot. In Hollywood, Jourdan became friends with several stars who shared his love of the game of croquet.

Enterprise borrowed him for No Minor Vices (1948), a box office flop. It was released by MGM, who borrowed Jourdan to appear in Madame Bovary (1949).

Selznick announced him for The Frenchman and the Bobbysoxer a sequel to The Bachelor and the Bobby-Soxer but it was not made. Selznick sold his interest in Jourdan for one film to Warner Bros.

All Jourdan's Hollywood films had lost money. He decided to buy out his contract with Selznick for $50,000.

At 20th Century Fox, Jourdan played the lead in a remake of Bird of Paradise (1951). The studio kept him on to appear in Anne of the Indies (1951), directed by Jacques Tourneur. He was announced for the romantic male lead in the Fox remake of Les Miserables but ended up not appearing in the film.

After appearing in Three Coins in the Fountain (1954), Jourdan made his Broadway début in the lead role in the Billy Rose stage adaptation of André Gide's novel, The Immoralist.

He returned to the Great White Way for a short run in 1955, and also that year he made his American TV début as Inspector Beaumont in the TV series Paris Precinct. In 1956, he appeared in the film The Swan playing the role of "Dr Nicholas Agi" along with Grace Kelly and Sir Alec Guinness for MGM. This was Kelly's last film, and lost money at the box office. More popular was Julie (1956) a thriller where Jourdan tormented Doris Day.

He returned to France to play the male lead in The Bride Is Much Too Beautiful (1956) with Brigitte Bardot as the lead actress, and Escapade (1957). In Britain he appeared in a swashbuckler, Dangerous Exile (1957).

Jourdan appeared in his biggest hit to date playing the romantic lead alongside Leslie Caron and Maurice Chevalier in the film version of the novella by Colette, Gigi (1958). This film won nine Academy Awards, including Best Picture. He enjoyed another hit with The Best of Everything (1959), an all star romance in the vein of Three Coins in the Fountain. He also appeared in a variety show on TV, An Evening with Louis Jourdan.

Jourdan was going to follow it in a remake of Dr Jekyll and Mr Hyde in England for Terence Fisher. "It's a terrific change of pace for me," he said. However he did not appear in the final film, The Two Faces of Dr. Jekyll.

Jourdan co-starred with Frank Sinatra, Chevalier and Shirley MacLaine in the musical Can-Can (1960). He travelled to Italy to appear in a peplum, Amazons of Rome (1961). Then it was back to France to star in a version of The Count of Monte Cristo (1961), a massive hit in France. Disorder (1962) was an Italian-French comedy, Mathias Sandorf (1963) was based on a novel by Jules Verne.

Jourdan also sang in the Alan Jay Lerner/Barton Lane stage musical, On a Clear Day You Can See Forever (1965), at least during its out-of-town tryout at the Colonial Theatre in Boston. He was replaced as leading man by John Cullum before the show reached Broadway.

During the 1970s, Jourdan recorded a series of spoken word albums of the Babar the Elephant books that were released by Caedmon Records.

In 1983, Jourdan played the villainous Kamal Khan in the James Bond movie Octopussy. He said at the time he earned most of his money over the past ten years doing commercials:

I take them so seriously that I participate in the original concept and the actual writing. After all, whatever an actor is doing, he's a salesman, so why not commercials? I must confess I love the theater best, though. I've never done a play I didn't like, but one often does movies just to keep functioning. They're less important to me than plays.

After his retirement from acting in 1992 Jourdan lived in Los Angeles. In July 2010 he was made a Chevalier de la Légion d'honneur, an honor that he received accompanied by friends, including Sidney Poitier and Kirk Douglas.

Jourdan has two stars on the Hollywood Walk of Fame at 6153 and 6445 Hollywood Boulevard.

Jourdan died at his home in Beverly Hills on 14 February 2015 at the age of 93. His body was buried at Westwood Village Memorial Park Cemetery in Los Angeles.

The contents of this page are sourced from Wikipedia article on 25 Mar 2020. The contents are available under the CC BY-SA 4.0 license.
View Louis Jourdan 's image gallery
Image Gallery 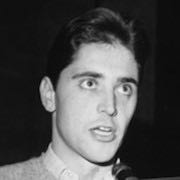