Bunch was born in Newark, New Jersey, in 1952 to Lonnie Bunch II (a science and chemistry public school teacher) and Montrose Bunch (a third-grade teacher public school teacher), both graduates of Shaw University. He grew up in Belleville, New Jersey, where his family were the only African Americans in their neighborhood. His grandfather, a former sharecropper, moved into the area as one of the first black dentists in the region. As a child, he experienced racism from white teenagers in his neighborhood. Bunch credits his childhood experiences with local Italian immigrants and his reading of biographies as a youth with inspiring him to study history. Bunch wanted to give a voice to those who were "anonymous" or not written about. In 2011 Bunch reflected on the early exposures: "I was in junior high and we were reading biographies of historic figures. I remember one on Gen. ‘Mad Anthony’ Wayne, and one on Clara Barton and Dorothea Dix. I thought, ‘Were there no histories of black people?’ One day, I was going through my grandfather's trunk and I found a book about black soldiers in the First World War. I devoured it."

He graduated from Belleville High School in 1970. Bunch attended Howard University but transferred to American University, Washington, DC, where he earned his B.A. and M.A. in American history and African history.

Bunch met Maria Marable in graduate school; they would eventually marry and she became Maria Marable-Bunch. The couple have two daughters.

Bunch started working at the Smithsonian Institution while he was working on his master's degree. After graduating, he was hired as a history professor at the University of Maryland. In 1983, he became the first curator at the California African American Museum. He worked at the National Museum of American History from 1989 until 1994 as a curator. Lonnie Bunch is an educator who was a Professor at the University of Maryland. He was promoted to Associate Director for Curatorial Affairs at the museum before leaving in 2000 to become the president of one of the nation's oldest museums in history, the Chicago Historical Society, from 2001 to 2005. In Chicago he led a successful capital campaign, and promoted outreach to diverse communities. One noted exhibit, Teen Chicago, focused on teenager life.

In 2005, Bunch was named the director of the Smithsonian Institution's National Museum of African American History and Culture. As founding director he designed a program of traveling exhibitions and public events prior to the opening of the museum.

He served on the Commission for the Preservation of the White House during the George W. Bush administration and was reappointed to the Commission by President Obama in 2010.

On May 28, 2019, Bunch was elected Secretary of the Smithsonian Institution. He became the first historian and first African American to lead the Smithsonian in its 173-year history, taking on his new role in mid-June 2019, at which time a search will begin for a new director for the NMAAHC.

He curated the National Museum of American History exhibition The American Presidency: A Glorious Burden. The exhibition was curated, built, and opened within eight months.

The contents of this page are sourced from Wikipedia article on 23 Jun 2020. The contents are available under the CC BY-SA 4.0 license.
View Lonnie Bunch 's image gallery
Image Gallery 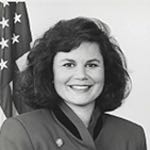