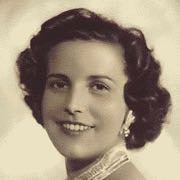 Lilian, Princess of Réthy
The basics

Mary Lilian Baels was born in London, England, where her parents had fled to during World War I. She was one of the nine children of Henri Baels from Ostend and his wife, Anne Marie de Visscher, a member of the Belgian nobility from Dentergem. Lilian was initially educated in English, but, upon her parents' return to Belgium, she attended the College of the Sacred Heart in Ostend, where she learned Dutch. Lilian continued her studies in French in Brussels. She was also fluent in German. She completed her education by attending a finishing school in London, the Holy Child.

In addition to academic work, Lilian participated extensively in sports, such as skiing, swimming, golfing, and hunting. Above all, however, she enjoyed, as did her father, literature and the arts. As a teenager, she was presented to King George V and Queen Mary of the United Kingdom at Buckingham Palace.

Friendship with the Belgian royal family

In 1933, Lilian saw her future husband, King Leopold III of Belgium, then still Duke of Brabant, for the first time during a military review. A few years later, when her father, then Governor of West Flanders, took his daughter to a public ceremony, she had the occasion to meet King Leopold, who presided at the event, for the second time. In 1937, Lilian and her mother met the King, now a widower, again on another ceremonial occasion.

Soon afterwards, King Leopold III contacted Governor Baels to invite him and his daughter to join him in a golfing party the next day. Lilian also saw the King in 1939 at a garden-party organised in honour of Queen Wilhelmina of the Netherlands, and later at the golf course at Laeken, where she was invited to lunch by Queen Elisabeth of Belgium, King Leopold's mother. A final golf party near the Belgian coast occurred in May 1940, shortly before the Nazi invasion of Belgium.

Following the Nazi invasion of Belgium, Lilian's mother put herself at the service of the Red Cross during the Belgian and Allied military campaign against the invaders. Lilian helped her mother actively in her new role, transporting Belgian and French wounded by car to the hospital of St. John in Bruges. Meanwhile, her father, Governor Baels, attempted to alleviate the plight of his invaded province. On 18 May, Henri Baels went in search of the Minister of the Interior, thinking he had left for France, to obtain his signature for an important relief measure. On his journey, however, Governor Baels had a car accident and injured his legs. He was admitted to a hospital in Le Havre. As the military situation in Belgium headed towards disaster, his wife decided to bring her daughters to safety in France, and Lilian drove the family car on the trip. Governor Baels' wife and daughters met him again, by pure chance, in a hospital in Poitiers. Baels was subsequently accused of having abandoned his post as Governor without justification by fleeing to France. He succeeded, however, in obtaining an audience with the King following the capitulation of the Belgian army on 28 May 1940 and the King's own imprisonment by the Germans at Laeken Castle. Baels and his daughter Lilian, who drove him to the audience, explained the real circumstances of his departure from Belgium, and the Governor was thereby vindicated. Subsequently, Lilian and her father returned to France and occupied themselves with the care of Belgian refugees in the region of Anglet. After Belgium's liberation, Henri Baels was accused of collaborating with the Nazis during the war, but this is clearly false, since he did not act as governor during the occupation and lived in France throughout the period.

In 1941, at the invitation of Queen Elisabeth, Lilian visited Laeken Castle, where King Leopold III, now a prisoner of war, was held by the Germans under house arrest. This visit was followed by several others, with the result that Leopold III and Lilian fell in love. Leopold proposed marriage to Lilian in July 1941, but Lilian declined his offer. "Kings only marry princesses," she said. Queen Elisabeth, however, prevailed upon Lilian to accept the King's offer. Lilian agreed to marry the King, but declined the title of queen. Instead, the King gave her the unofficial title "Princess of Réthy." It was agreed that any descendants of the King's new marriage would be excluded from succession to the throne.

Leopold and Lilian initially planned to hold their official, civil marriage after the end of the war and the liberation of Belgium, but in the meantime, a secret religious marriage ceremony took place on 11 September 1941, in the chapel of Laeken Castle, in the presence of Queen Elisabeth, Henri Baels, and Cardinal van Roey, Archbishop of Mechelen and primate of Belgium. This actually contravened Belgian law, which required that the religious wedding be preceded by the civil one. Although Lilian and Leopold had originally planned to postpone their civil marriage until the end of the war, Lilian was soon expecting her first child, necessitating a civil marriage, which took place on 6 December 1941. The civil marriage automatically made Lilian a Princess of Belgium. Lilian proved a devoted wife to the King and an affectionate and vivacious stepmother to his children by his first wife, Queen Astrid.

When the civil marriage of Leopold and Lilian was made public in a pastoral letter by Cardinal van Roey read throughout Belgian churches in December 1941, there was a mixed reaction in Belgium. Some showed sympathy for the new couple, sending flowers and messages of congratulations to the palace at Laeken. Others, however, argued that the marriage was incompatible with the King's status as a prisoner-of-war and his stated desire to share the hard fate of his conquered people and captive army, and was a betrayal of Queen Astrid's memory. They also branded Lilian as a social-climber. One of the leading Belgian newspapers rebuked King Leopold: "Sire, we thought you had your face turned towards us in mourning. Instead you had it hidden in the shoulder of a woman." Leopold and Lilian were also blamed for violating Belgian law by holding their religious marriage before their civil one. These criticisms would continue for many years, even after the war.

According to Lilian's account, the news of her secret marriage with King Leopold upset and worried her mother, who foresaw that it would provoke a political storm. Her mother quoted "My little one, you don't know what's in store for you. It will be appalling, they will all attack you, you will have a terribly hard life."

Queen Astrid's parents, Prince Carl and Princess Ingeborg of Sweden, did not take the hard line against King Leopold's remarriage. Princess Ingeborg told a Belgian journalist that she couldn't understand all the animus in Belgium against the king's second marriage, that it was perfectly natural for a young man not to want to remain alone forever. She said she was happy about her son-in-law's new marriage, both for his own sake and for the sake of her grandchildren.

In 1944, the Belgian royal family was deported to Nazi Germany, where they were strictly guarded by 70 members of the SS, under harsh conditions. The family suffered from a deficient diet and lived with the constant fear that they would be massacred by their jailers, as an act of revenge on the part of the Nazis, angered at their defeat (by now becoming increasingly certain) by the Allies, or that they would be caught in the cross-fire between Allied forces and their captors, who might try to make a desperate last stand at the site of the royal family's internment. The family's fears were not unfounded. At one point, a Nazi official tried to give them cyanide, pretending it was a mixture of vitamins to compensate for the captives' poor diet during their imprisonment. Lilian and Leopold, however, were rightly suspicious and did not take the pills or give them to their children. During their period of captivity in Germany, (and later Austria), Leopold and Lilian jointly homeschooled the royal children. The King taught scientific subjects; his wife, arts and literature. In 1945, the Belgian royal family was liberated by American troops under the command of Lieutenant General Alexander Patch, who thereafter became a close friend of King Leopold and Princess Lilian.

"Royal Question" and the aftermath

Following his liberation, King Leopold was unable to return to Belgium (by now liberated as well) due to a political controversy that arose in Belgium surrounding his actions during World War II. He was accused of having betrayed the Allies by an allegedly premature surrender in 1940 and of collaborating with the Nazis during the occupation of Belgium. In 1946, a juridical commission was constituted in Brussels to investigate the King's conduct during the war and occupation. During this period, the king and his family lived in exile in Pregny-Chambésy, Switzerland, and the King's younger brother, Prince Charles, Count of Flanders, was made regent of the country.

The commission of inquiry eventually exonerated Leopold of the charges and he was able, in 1950, to return to Belgium and resume his royal duties. Political agitation against the King continued, however, leading to civil disturbances in what became known as the Royal Question. As a result, in 1951, to avoid tearing the country apart and to save the embattled monarchy, King Leopold III abdicated in favour of his 21-year-old son, Prince Baudouin.

In the first nine years reign of her stepson, King Baudouin, Lilian acted as First Lady of Belgium and managed the life of the Court with firmness and refinement, but she was never loved by the Belgians.

The ex-King Leopold and Princess Lilian continued to live in the royal palace at Laeken until the marriage of Baudouin to Doña Fabiola de Mora y Aragón in 1960.

In 1960, following the marriage of King Baudouin, Leopold and Lilian moved out of the royal palace to a government property, the estate of Argenteuil, Belgium. Lilian employed various designers to transform the dilapidated mansion on the property into a distinguished and elegant residence for the ex-King. Argenteuil became a cultural centre under the auspices of Leopold and Lilian, who cultivated the friendship of numerous prominent writers, scientists, mathematicians, and doctors. Leopold and Lilian also travelled extensively all over the world. Following her son Alexandre's heart surgery in the United States during his childhood, Princess Lilian became very interested in medicine, and, in particular, in cardiology, and founded a Cardiological Foundation which, through its work, has saved the lives of hundreds of people. Both before and after her husband's death in 1983, Lilian pursued her interests in intellectual and scientific spheres with energy and passion.

Her belongings from the chateau were put up at auction in Amsterdam.

Lilian was known as a woman who was terribly strict and demanding towards herself, and, a result, as one who could be excessively severe with others as well. Due to the controversy surrounding King Leopold's wartime actions, and, in particular, his second marriage, Lilian was widely unpopular in Belgium. She also, however, had a circle of close friends, who saw her as a woman of great beauty, charm, intelligence, elegance, strength of character, kindness, generosity, humor and culture. They admired her for the courage and dignity with which she faced a long series of personal attacks, both during the Royal Question and for decades afterwards.

Princess Lilian died at the Domaine d'Argenteuil in Waterloo, Belgium. Before her death, she had expressed the desire to be buried at Argenteuil. Her wish was denied, however, and she was buried in the royal crypt of the Church of Our Lady, Laeken, Belgium, with King Leopold and his first wife, Queen Astrid.

Following Princess Lilian's death, a cardiological conference was organised and prominent doctors and surgeons such as DeBakey and many others rendered an homage to Lilian and her contributions to cardiology.