Askin was born into a Jewish family in Vienna, the son of Malvine (Susman) and Samuel Aschkenazy. According to his autobiography his first experience of show business occurred during World War I when he recited a poem before Emperor Franz Joseph. In the 1920s, he studied acting with Louise Dumont and Max Reinhardt. While working at Vienna's "ABC" cabaret theater in the 1930s, he frequently directed the works of dissident political writer Jura Soyfer.

Askin fled Austria to the United States in 1940, after having been beaten and abused by the Nazi SA and SS. His parents were murdered in the Treblinka Death Camp. He then served in World War II as a Staff Sergeant in the US Army Air Forces. After the war, he went to Hollywood to begin a career in films, invariably portraying foreign characters who speak English with a strong accent. Askin appeared as the Russian composer Anton Rubinstein in a Disneyland anthology episode of the life of Peter Tchaikovsky. Fans of the television series Adventures of Superman recall his portrayals of an eastern European diamond smuggler (Joseph Ferdinand) in the 1953 black-and-white episode "Superman in Exile", and as a South American prime minister in a color episode. He appeared in 20th Century Fox's biblical epic The Robe in 1953 as a Syrian guide named Abidor. In 1960, he appeared in the film Pension Schöller, and the following year was prominently featured in Billy Wilder's film One, Two, Three, co-starring with James Cagney.

Askin gained wide recognition and popularity for his recurring role as the stern General Albert Burkhalter in the sitcom Hogan's Heroes appearing in 67 episodes (including the pilot) of the show’s run from 1965 to 1971. Burkhalter was the gruff and portly commanding officer of Colonel Klink, the bungling commandant of a German World War II prisoner-of-war camp, manipulated by the American Colonel Hogan so the prisoners would get away with their clandestine activities.

Askin made guest appearances on My Favorite Martian 1965 episode "Martin Of The Movies" as Von Reinbein. The Monkees 1967 episode "The Card Carrying Red Shoes", as Nicolai, on Daniel Boone in its 1969 episode "Benvenuto... Who?" as Roquelinm and in the "Fiddler in the House" episode of the 1974 situation comedy Paul Sand in Friends and Lovers as a violin virtuoso. Between 1977 and 1979, he appeared in Steve Allen's PBS series, Meeting of Minds, portraying Martin Luther and Karl Marx. He portrayed a psychology professor in a season six episode of Happy Days. In 1979 he portrayed the character Mr. Hoffmeier of Hoffmeier’s Bakery, judging a pie contest in an episode in the third season of Three’s Company titled, "The Bake-Off".

Askin died from natural causes in Vienna on June 3, 2005, at the age of 97 and is interred at Zentralfriedhof.

The contents of this page are sourced from Wikipedia article on 09 Mar 2020. The contents are available under the CC BY-SA 4.0 license.
View Leon Askin 's image gallery
Image Gallery 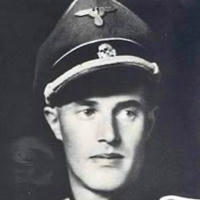