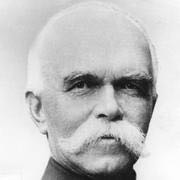 Georg Leo Graf von Caprivi de Caprera de Montecuccoli (English: Count George Leo of Caprivi, Caprera, and Montecuccoli), born Georg Leo von Caprivi, (24 February 1831 – 6 February 1899) was a German general and statesman who succeeded Otto von Bismarck as Chancellor of Germany. Caprivi served as German Chancellor from March 1890 to October 1894. Caprivi promoted industrial and commercial development, and concluded numerous bilateral treaties for reduction of tariff barriers. However, this movement toward free trade angered the conservative agrarian interests, especially the Junkers. He promised the Catholic Center party educational reforms that would increase their influence, but failed to deliver. As part of Kaiser Wilhelm's "new course" in foreign policy, Caprivi abandoned Bismarck's military, economic, and ideological cooperation with the Russian Empire, and was unable to forge a close relationship with the United Kingdom of Great Britain and Ireland. He successfully promoted the reorganization of the German military.

Leo von Caprivi was born in Charlottenburg (then a town in the Prussian Province of Brandenburg, today a district of Berlin) the son of jurist Julius Leopold von Caprivi (1797–1865), who later became a judge at the Prussian supreme court and member of the Prussian House of Lords. His father's family was of Italian (Caprara Montecuccoli, from Modena) and possibly Slovene origin; it has been claimed that their original surname was Kopriva and they originated from Koprivnik (Nesseltal) near Kočevje in the Kočevje Rog (Hornwald) region of Lower Carniola (present-day Slovenia). However, other research states that this cannot be confirmed. The Caprivis were ennobled during the 17th century Ottoman–Habsburg wars, they later moved to Landau in Silesia. His mother was Emilie Köpke, daughter of Gustav Köpke, headmaster of the Berlinisches Gymnasium zum Grauen Kloster and teacher of Caprivi's predecessor Otto von Bismarck.

On a personal level, Leo von Caprivi was an affable man with few close friends. He never married.

Caprivi entered the Prussian Army in 1849 and served in the Second Schleswig War of 1864, the Austro-Prussian War of 1866 as a major in the staff of Prince Friedrich Karl of Prussia, and the Franco-Prussian War of 1870/71, the latter as chief of staff of the X Army Corps. Backed by the Chief of the general staff Helmuth von Moltke, Caprivi achieved the rank of lieutenant colonel and distinguished himself at the Battle of Mars-la-Tour, the Siege of Metz and the Battle of Beaune-la-Rolande, receiving the military order Pour le Mérite.

After the war he served at the Prussian War Ministry. In 1882, he became commander of the 30th Infantry Division at Metz. In 1883, he succeeded Albrecht von Stosch, a fierce opponent of Chancellor Bismarck, as Chief of the Imperial Navy. The appointment was made by Bismarck and caused great dissatisfaction among the officers of the navy. According to historian Robert K. Massie, at the time of Caprivi's appointment, he "had no interest in naval affairs and did not know the names of his officers or the emblems of rank on the uniforms they wore." However, Caprivi showed significant administrative talent in the position.

Caprivi emphasized the development and construction of torpedo boats during his tenure as naval chief. This eventually led him into conflict with Emperor Wilhelm II, who favored larger battleships on the English model. After being overruled on the issue by the Kaiser, Caprivi resigned in 1888. He was briefly appointed to the command of his old army corps, the X Army Corps stationed in Hanover, before being summoned to Berlin by Emperor Wilhelm II in February 1890.

In Berlin, Caprivi was informed that he was the Kaiser's intended choice if Bismarck was resistant to Wilhelm's proposed changes to the government, and upon Bismarck's dismissal on 18 March, Caprivi became Chancellor. Though his exact motives are unknown, Wilhelm appears to have viewed Caprivi as a moderate who would make a sufficiently strong replacement for Bismarck, should the former chancellor make trouble in retirement, yet lacked the ambition to seriously oppose the throne. For his part, Caprivi was unenthusiastic, yet felt duty-bound to obey the Emperor. He said to one gathering, "I know that I shall be covered in mud, that I shall fall ingloriously".

Caprivi's administration was marked by what is known to historians as the Neuer Kurs ("New Course") in both foreign and domestic policy, with moves towards conciliation of the Social Democrats on the domestic front, and towards a pro-British foreign policy, exemplified by the Anglo-German Agreement of July 1890, in which the British ceded the island of Heligoland to Germany in exchange for control of Zanzibar. This led to animosity from the colonialist pressure-groups like the Alldeutscher Verband, while Caprivi's free trading policies led to opposition from conservative agrarian protectionists. The treaty also gave Germany the Caprivi Strip, which was added to German South West Africa, thus linking that territory with the Zambezi River, which he had hoped to use for trade and communications with eastern Africa (the river proved to be unnavigable). In general, Caprivi did not believe that Germany should compete with other powers for overseas colonies but rather should focus on its position within Europe.

Only a week into office, Caprivi was forced to choose whether to renew the Reinsurance Treaty, a secret alliance Bismarck had made with Russia. Caprivi opposed the ideas of a preventive war against Russia developed by General Alfred von Waldersee. Nevertheless, he conformed to the decision of officials of the Foreign Office around Friedrich von Holstein not to renew the Reinsurance Treaty and focus on a more straightforward alliance with Austria-Hungary. Unaware of the Foreign Office's determination, Wilhelm II had personally assured Russian Ambassador Count Pavel Andreyevich Shuvalov that the treaty would be renewed. When Caprivi discussed the issue with the Emperor, Wilhelm II yielded to his Chancellor, unwilling to dismiss another chancellor one week after dismissing Bismarck. The treaty was not renewed, and Shuvalov was shocked at the sudden reversal. In the years following this rejection, Russia forged the Alliance with France.

A number of progressive reforms were carried out during Caprivi's time as Chancellor. The employment of children under the age of 13 was forbidden and 13- to 18-year-olds restricted to a maximum 10-hour day, in 1891 Sunday working was forbidden and a guaranteed minimum wage introduced, and working hours for women were reduced to a maximum of 11. Industrial tribunals were established in 1890 to arbitrate in industrial disputes, and Caprivi invited representatives of trade unions to sit on these tribunals. In addition, duties on imported timber, cattle, rye, and wheat were lowered and a finance bill introduced progressive income tax under which the more one earned, the more tax that person paid. Other achievements included the army bills of 1892 and 1893, and the commercial treaty with Russia in 1894.

Caprivi clashed with Wilhelm increasingly during his term as Chancellor, offering his resignation nearly a dozen times in four years. The Kaiser privately called him "a sensitive old fathead". The rejection by the Conservatives intensified, accompanied with constant public attacks by retired Bismarck. Caprivi also lost the support of the National Liberals and Progressives in a legislative defeat of 1892 on an educational bill providing denominational board schools, a failed attempt to re-integrate the Catholic Centre Party after the Kulturkampf. Caprivi, although himself a Protestant, needed the 100 votes of the Catholic Centre Party but that alarmed the Protestant politicians. Caprivi had to resign as Prussian Minister President and was replaced by Count Botho zu Eulenburg, leading to an untenable division of powers between the Chancellor and the Prussian premier. When the two clashed over revisions to the criminal code in 1894, Wilhelm II required both to resign. They were succeeded by Prince Chlodwig von Hohenlohe-Schillingsfürst.

Following his resignation, Caprivi destroyed his papers. In retirement, he refused to speak or write publicly about his experiences as Chancellor or share his opinions on current events. He died in 1899 in Skyren in Germany (today known as Skórzyn, Poland).