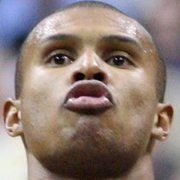 Leandro Mateus Barbosa ([leˈɐ̃dɾu baʁˈbozɐ]; born November 28, 1982), also known as Leandrinho Barbosa, is a Brazilian professional basketball player for Minas of the Novo Basquete Brasil (NBB). He also represented the senior Brazilian national basketball team. He previously won the NBA Sixth Man of the Year Award, with the Suns in 2007, and an NBA championship with the Golden State Warriors, in 2015. In Brazil, he is also commonly known by his nickname "Leandrinho" ("Little Leandro") Barbosa, and in the USA he is nicknamed "The Brazilian Blur", referring to his playing speed. At a height of 1.92 m (6' 3​⁄4") tall, he plays at the shooting guard position.

Barbosa started his career with Palmeiras, when he was 17. He played in the regional São Paulo State Championship, under the command of Lula Ferreira, who went on to become the senior Brazilian national team's head coach.

At 19, while playing in the regional São Paulo State Championship with Palmeiras, he averaged 14.2 points per game. After that, he was traded to the Brazilian club Bauru, in January 2001.

During his first season as a professional in Brazil, while playing with Tilibra/Bauru, he was coached by Jorge "Guerrinha" Guerra. He averaged 15.8 points, 6.4 assists, and 1.7 steals per game. He was named the São Paulo State Championship's 2001 Rookie of the Year. Barbosa ended the season as the regional competition's fourth-ranked player in three-point field goal percentage, sixth in assists, and eleventh in field goals. In 2002, he won Brazil's top-tier level league, the Brazilian Championship, as a member of Bauru. Barbosa was also selected to the senior Brazilian national team, and he played at the 2002 FIBA World Championship.

At 6'3" with a 6'10" wingspan, Barbosa was selected 28th overall in the 2003 NBA draft by the San Antonio Spurs, but his rights were acquired by the Suns in a trade for a future protected first-round draft pick.

Barbosa holds the Suns record for points scored in a game by a rookie as a first-time starter, with 27 against the Chicago Bulls on January 5, 2004. He set the Suns' record for three-point field goals by a rookie in consecutive games when he hit at least one three-pointer per game during a ten-game streak from January 2 to 19.

He scored a career-high of 41 points against the Oklahoma City Thunder on February 20, 2009.

On July 14, 2010, Barbosa was traded along with Dwayne Jones to the Toronto Raptors in exchange for Hedo Türkoğlu.

On August 18, 2011, Barbosa signed with Flamengo Basketball of Brazil for the duration of the 2011 NBA lockout. His deal had an out-clause that would allow him to return to the NBA once the lockout ended. With the lockout concluding in December 2011, he returned to the Raptors.

On March 15, 2012, Barbosa was traded to the Indiana Pacers for a future second-round pick. With the help of Barbosa, Indiana improved significantly enough to make it to the second round of the playoffs before losing to the Miami Heat.

On October 18, 2012, Barbosa signed with the Boston Celtics.

On February 12, 2013, after a game against the Charlotte Bobcats on February 11, it was confirmed that Barbosa had suffered a torn ACL in his left knee. This injury ruled him out for the rest of the 2012–13 season. He was the third member of the team whose injury ended his season early in a span of three weeks, joining Rajon Rondo and Jared Sullinger.

On February 21, 2013, Barbosa and Jason Collins were traded to the Washington Wizards in exchange for Jordan Crawford. Despite being on the team during that time, he'd never play for the Wizards in the process.

On November 19, 2013, Barbosa signed with the Esporte Clube Pinheiros of Brazil for the 2013–14 season. During this time, he averaged over 20 points, 3 rebounds, and 3 assists for the team. In January 2014, he returned to the United States to play in the NBA once again.

On January 8, 2014, Barbosa signed a 10-day contract with the Phoenix Suns. Barbosa would immediately play for the Suns in their 104–103 close victory over the Minnesota Timberwolves. He'd have his best night during the first 10-day contract on January 13 against the New York Knicks when Barbosa would score 21 points, which was his first 20+ point game since 2012, back when he played for Boston. However, Barbosa would have a right shoulder strain after the game.

On January 28, 2014, following the Suns' road game against the Philadelphia 76ers, which subsequently marked the end of his second 10-day contract, the Suns liked Barbosa's production for the team and they decided to sign him for the rest of the 2013–14 NBA season. On March 4, 2014, in a game against the Los Angeles Clippers at home, Barbosa fractured his right hand, and as a result, he missed the rest of the season.

On September 10, 2014, Barbosa signed with the Golden State Warriors following his great performance at the 2014 FIBA Basketball World Cup. On December 30, 2014, he scored a season-high 17 points in a 126–86 win over the Philadelphia 76ers. Barbosa won his first NBA championship with the Warriors after they defeated the Cleveland Cavaliers in the 2015 NBA Finals in six games.

On July 13, 2015, Barbosa re-signed with the Warriors. In 2015–16, Barbosa helped the Warriors win an NBA record 73 games to eclipse the 72 wins set by the 1995–96 Chicago Bulls. The Warriors made it to the 2016 NBA Finals after overcoming a 3–1 deficit against the Oklahoma City Thunder in the Western Conference Finals. In Game 1 of the NBA Finals against the Cleveland Cavaliers, Barbosa returned from a minor back injury to score 11 points on 5-of-5 shooting off the bench in a 104–89 win. Despite the Warriors going up 3–1 in the series following a Game 4 win, they went on to lose the series in seven games to become the first team in NBA history to lose the championship series after being up 3–1.

On July 19, 2016, Barbosa signed a multi-year deal with the Phoenix Suns, returning to the franchise for a third stint just weeks before playing for his home nation at the 2016 Summer Olympics in Rio de Janeiro. On December 9, 2016, Barbosa scored a season-high 21 points and hit five three-pointers in a 119–115 win over the Los Angeles Lakers. On December 28, 2016, in a loss to the San Antonio Spurs, Barbosa played his 517th game with the Suns, moving him past Amar'e Stoudemire in to 10th on the Suns' all-time games played list. On March 3, 2017 against the Oklahoma City Thunder, Barbosa made his 544th appearance in a Suns jersey, passing Mark West for 9th all-time in games played. His 14 points also pushed him passed Connie Hawkins for 14th in all-time scoring with Phoenix. On July 3, 2017, he was waived by the Suns.

On November 17, 2017, Barbosa returned to Brazil and signed with Franca.

On December 13, Barbosa signed with Minas.

He was the top scorer of the 2007 FIBA AmeriCup.

Barbosa is engaged to the international top model Talita Rocca. Recently, they announced their wedding. The ceremony was held on July 6, 2019, in Brazil.

The contents of this page are sourced from Wikipedia article on 08 Mar 2020. The contents are available under the CC BY-SA 4.0 license.
View Leandro Barbosa 's image gallery
Image Gallery