Launy Grøndahl (June 30, 1886 – January 21, 1960) was a Danish composer and conductor. Grøndahl studied the violin from the age of eight. His first work as a professional musician was as a violinist with the Orchestra of the Casino Theatre in Copenhagen, aged thirteen.
He was also for a long period (1925–1956) the resident conductor of the Danish National Symphony Orchestra, Denmark's most prestigious orchestra.

Some of his first works included a symphony, works for small string ensembles and a violin concerto.

He is best known for his trombone concerto, written in 1924 during Grøndahl's time in Italy. It was reportedly written for the trombone section of the Orchestra of the Casino Theatre in Copenhagen (of which Grøndahl was a member) due to their high standard of playing.

He is also remembered for his pioneering recordings of the symphonies of fellow Dane Carl Nielsen and his original score for Benjamin Christensen's classic silent film Häxan. 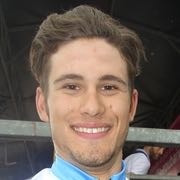