He was born into a family of a sake brewery in Kyoto, Japan. After graduating from Kobe University and resigning from an advertising agency, he played an active part in a Japanese theatrical group called "Planet Pistachio," as a stage actor, from 1990 to 1998.

He later extended the range of activities on TV dramas and movies, and has played important roles on many works in Japan. He made his film debut starring in Mamiya Kyodai in 2006, and his TV series debut starring in Gira Gira in 2008.

When Sasaki was a freshman and received a phone call from his college company to decide on a stage name, his father suggested the name Kuranosuke, with a double meaning; for Kura, a sake cellar/brewery for their sake brewery, and for Ōuchi Kuranosuke, a famous historical drama role.

Sasaki's initial plan was to join the family business of sake brewing as the eldest son when graduated from college. Learning sales strategy at an advertisement company was also part of his plan.

His family was not supportive when he aspired to be an actor, until he played a part in Audrey (NHK, 2000). His father sold sake named "Audrey", and then a premium junmai sake Hancho for a limited period while the TV drama was aired; Kuranosuke played a lead in Hancho. 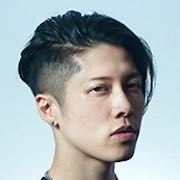