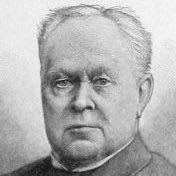 After studying philosophy at Leipzig and Halle, became a privatdocent at Heidelberg in 1850. The Baden government in 1853 laid an embargo on his teaching owing to his liberal ideas, but the effect of this was to rouse considerable sympathy for his views, and in 1856 he obtained a professorship at Jena, where he soon acquired great influence by the dignity of his personal character. In 1872, on Eduard Zeller's move to Berlin, Fischer succeeded him as professor of philosophy and the history of modern German literature at Heidelberg.

He was a brilliant lecturer and possessed a remarkable gift for clear exposition. His fame rests primarily on his work as a historian and commentator of philosophy. As far as his philosophical views were concerned, he was, generally speaking, a follower of the Hegelian school. His writings in this direction, especially his interpretation of Kant, involved him in a quarrel with F. A. Trendelenburg, professor of philosophy at the University of Berlin, and his followers. In 1860, Fischer's Kants Leben und die Grundlagen seiner Lehre (Kant's life and the foundations of his doctrine) lent the first real impulse to the so-called “return to Kant.”

One of Fischer's most significant and lasting contributions to philosophy was the use of the empiricism/rationalism distinction in categorising philosophers, particularly those of the 17th and 18th centuries. These include John Locke, George Berkeley and David Hume in the empiricist category and René Descartes, Baruch Spinoza and G.W. Leibniz in the rationalist category. Empiricism, it is said, claims that human knowledge is derived from sensation, i.e. experience, while rationalism claims that certain knowledge can be acquired before experience through pure principles. Although influential, in more recent times this distinction has been questioned as anachronistic in its failure to represent precisely the exact claims and methodologies of the philosophers it categorises.

Kuno Fischer's History of Modern Philosophy had a strong impact on Friedrich Nietzsche and his view on modern philosophy, particularly on Spinoza. Frege and W. Somerset Maugham were amongst his students.

A little anecdote of German university life in the nineties may illustrate the point. Kuno Fischer, a second-rate philosopher at Heidelberg, was one day disturbed by the noise of workers who were putting in new cobblestones in the street before his house. He had at that time been offered a professorship in Berlin. So he opened his window and shouted to the workmen, "If you don't stop that noise at once, I'll accept the call to Berlin". Whereupon the foreman ran to the mayor, he summoned the Stadtbaumeister and they decided to postpone repair of the street until after the beginning of the academic vacation.

Other translations of his works are: