Born and raised in Sydney, White was involved in school plays and concerts at a young age, while also studying ballet, piano and drama. White aspired to have an acting career and, when she was 14, along with 70 other teenagers, she wrote and performed a play called Winds of the Solstice at the Sydney Opera House. After completing high school, White began an arts degree at Sydney University, studying English, Linguistics, Philosophy and Australian Literature, but focusing on drama. In 1994, White moved to Perth to focus on her acting career.

White began her television acting career with a guest role on Murder Call in 1997 and had another small role in Children's Hospital in the same year. She also had a one episode role in Murder Call. In 1998 she joined the cast of Australian hospital drama All Saints playing nurse Stephanie Markham. After 106 episodes she left the series in 2000. White had a one episode role in White Collar Blue. In 2003, White had a guest role in the third season of The Secret Life of Us in the episode, "Playing With Fire".

In 2005 she appeared in The Department Store.

White formerly worked as a behavioural therapist for The L.E.A.R.N. Foundation, an organisation that works with children with autism. 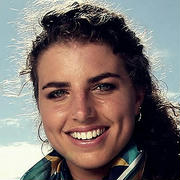