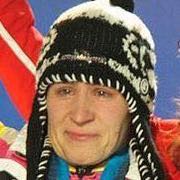 Kerstin Szymkowiak (born Kerstin Jürgens on 19 December 1977 in Siegen) is a German retired skeleton racer who has competed since 2002. She won three bronze medals in the women's skeleton event, earning them in 2004, 2008, and 2009.

Her best overall seasonal finish in the women's Skeleton World Cup title was third in 2004-5.

Szymkowiak's nickname is the "Ice Tiger" (Eistiger in German). She earned the silver medal at the 2010 Winter Olympics in Vancouver.

After retiring from the sport Szymkowiak was appointed an Athlete Role Model for the 2012 Winter Youth Olympics in Innsbruck. In May 2012 the Swiss bobsleigh and skeleton federation announced that Szymkowiak had been elected as head of their skeleton section.

Szymkowiak's husband Philippe is a massage therapist for the Swiss national bobsleigh team. She gave birth to a daughter, Noalie, in September 2010.