Keisha Lance Bottoms (born January 18, 1970) is an American politician and lawyer who is the 60th mayor of Atlanta, Georgia. She was elected mayor in 2017. Before becoming mayor, she was a member of the Atlanta City Council, representing part of Southwest Atlanta.

Bottoms was born in Atlanta, Georgia, on January 18, 1970, to Sylvia Robinson and R&B singer-songwriter Major Lance. She was raised in Atlanta.

Bottoms was elected mayor in 2017, after receiving a plurality of votes (26%) in a crowded field of candidates on Election Day, then defeating fellow City Council member Mary Norwood in the runoff election.

Bottoms was investigated during the mayoral election for several lump payments to campaign staff totaling over $180,000 that were not properly reported. In October 2017, she voluntarily returned $25,700 in campaign contributions she had received from PRAD Group, an engineering contractor whose office had been raided by the Federal Bureau of Investigation the previous month. On November 4, 2017, she called on the attorney general of Georgia to investigate fake robocalls made in her name, which her campaign said were laden with racist overtones and made primarily in Atlanta's white neighborhoods.

Bottoms declared that Atlanta was a "welcoming city" and "will remain open and welcoming to all" following President Trump's actions regarding refugees in the United States. In 2018, she signed an executive order forbidding the city jail to hold ICE detainees. In July 2019, Bottoms said, "Our city does not support ICE. We don't have a relationship with the U.S. Marshal[s] Service. We closed our detention center to ICE detainees, and we would not pick up people on an immigration violation."

In June 2019, Bottoms endorsed Joe Biden in the 2020 Democratic Party presidential primaries. In March 2020, Politico reported her as a possible vice-presidential pick for Biden. In June, CNN reported that she was among his top four choices, along with Representative Val Demings and Senators Kamala Harris and Elizabeth Warren.

Bottoms strongly rebuked Georgia Governor Brian Kemp after he announced the reopening of Georgia businesses in April 2020, saying that it was too early in the COVID-19 pandemic.

When Atlanta experienced riots in the wake of the death of George Floyd, Bottoms condemned those involved, but later expressed optimism while speaking to demonstrators at a protest, saying, "there is something better on the other side of this." She also repeatedly condemned Trump for "making it worse" and stoking racial tensions, and encouraged people to vote, saying, "If you want change in America, go and register to vote. That is the change we need in this country." In June 2020, many Atlanta Police Department officers went on strike to protest the charges brought against the officers involved in the killing of Rayshard Brooks. Bottoms said that APD morale "is down tenfold".

Bottoms is the only mayor in Atlanta's history to have served in all three branches of government, serving as a judge and City Councilmember before being sworn in as mayor.

Following a string of homicides that included 8 year old Secoriea Turner, Georgia Governor Brian Kemp declared a state of emergency and sent 1,000 Georgia National Guard troops to quell the violence in Atlanta. This declaration followed a July 5 announcement from Kemp that he would "take action" to curb the violence if Bottoms failed to do so.

Derek Bottoms is the vice president of employment practices and associate relations for The Home Depot. He joined the company in 2000, after spending over five years at the law firm Powell Goldstein. He has served as a board member for several foundations.

On July 6, 2020, Bottoms announced that she had tested positive for COVID-19.

The contents of this page are sourced from Wikipedia article on 07 Jul 2020. The contents are available under the CC BY-SA 4.0 license.
View Keisha Lance Bottoms 's image gallery
Image Gallery 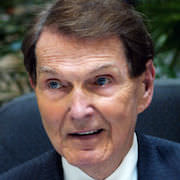