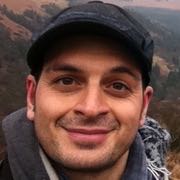 Kaya Yanar (born 20 May 1973 in Frankfurt am Main, Germany) is a German comedian, best known for his comedy show Was guckst du?! (Whaddaya lookin' at?!).

He was born to Turkish immigrants from Antakya. While at school he once told his teacher that he wanted to be a comedian, which made the teacher laugh. In an interview with German talkshow host Johannes B. Kerner Yanar described his childhood as a more liberal one and stated that despite his Turkish nationality, he doesn't have a perfect grasp of the Turkish language. After graduating from Heinrich-von-Gagern-Gymnasium (a school in Frankfurt) he studied phonetics, American studies and philosophy but left university prior to graduation.

In his one-man comedy show Was guckst du?!, Yanar toys with well-known cultural stereotypes both as host and main performer. For one of his best known sketches about an East Indian, Ranjid and his pet cow (and substitute best friend) Benita, he practiced pidgin-English for months, which he learned from some Indian friends of his from university. He also parodies the stereotypical way Turkish migrants use to speak.

Furthermore, he toured through Germany with solo programmes. Fixations of his programmes "Made in Germany" (2008), "Live und unzensiert" (2009) and "All Inclusive!" (2013) were broadcast by German TV station RTL.

He also presented the ZDF-Show "Kaya Yanar testet Deutschland – die Multi-Kulti-Show (2007)" as part of a theme week focusing on integration. Because of his great success being without precedent for an artist with Turkish migration background in the German-speaking countries at the time of his appearance, Yanar is considered as a key figure and trailblazer for the acceptance of multicultural issues.

Since December 2012 Yanar is godfather of the "Heinrich-Middendorf-Oberschule Aschendorf" in the project "Schule ohne Rassismus – Schule mit Courage" ("School without racism - school with courage").

In 2014 RTL started broadcasting his show ""Geht's noch?! Kayas Woche"", a weekly current affairs programme with a mixture of stand up comedy and political satire.

Kaya Yanar is also a member of the jury in the German "Comedy Grand-Prix"; an annual comedy contest which is broadcast on TV to seek the "best German comedian".

Kaya is a vegan (formerly pescetarian), he is an animal rights activist and he supports PETA.

The contents of this page are sourced from Wikipedia article on 08 Mar 2020. The contents are available under the CC BY-SA 4.0 license.
View Kaya Yanar 's image gallery
Image Gallery