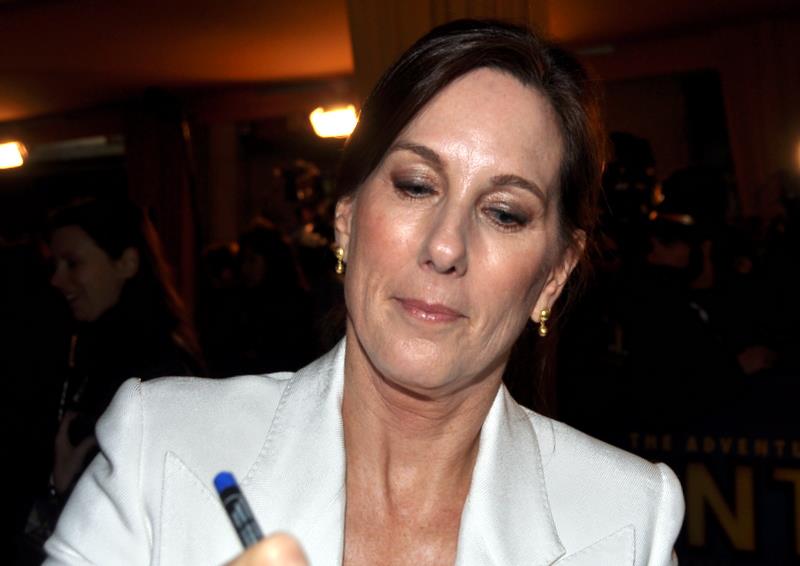 Kathleen Kennedy (born June 5, 1953) is an American film producer. In 1981, she co-founded Amblin Entertainment with Steven Spielberg and husband Frank Marshall. She was a producer on the 1982 film E.T. the Extra-Terrestrial and the Jurassic Park franchise, the first two of which became two of the top ten highest-grossing films of the 1990s. Kennedy is third only to Spielberg and Stan Lee in domestic box office receipts, with over $6 billion as of December 2015.
On October 30, 2012, she became the president of Lucasfilm, and the brand manager of the Star Wars franchise, after The Walt Disney Company acquired the company for over $4 billion. It was then announced that the first project under her authority would be Episode VII of the Star Wars saga, Star Wars: The Force Awakens, which was released on December 18, 2015, becoming the biggest domestic earner in North America.
Overall, Kennedy's work has included over 60 films, 120 Academy Award nominations, and over $11 billion worldwide including three of the highest-grossing films in motion picture history. One of her most recent projects, Lincoln, also produced by Spielberg, was nominated for seven Golden Globes and twelve Academy Awards.

Kennedy was born in Berkeley, California, the daughter of Dione Marie "Dede" (née Dousseau), a one-time theater actress, and Donald R. Kennedy, a judge and attorney. Kennedy has two sisters. Her twin sister, Connie, formerly a Location Manager in British Columbia, Canada, is now the executive producer of the Virtual Production company Profile Studios. Kennedy graduated from Shasta High School in Redding, California, in 1971. She continued her education at San Diego State University where she majored in telecommunications and film. In her final year, Kennedy got a job at a local San Diego TV station, KCST, taking on various roles including camera operator, video editor, floor director and finally KCST news production coordinator.

After her employment with KCST, she then went on to produce a local talk show, entitled You're On, for the station for four years before moving to Los Angeles. In Los Angeles, Kennedy secured her first film production job working as an assistant to John Milius, who at the time was executive producer of Spielberg's 1941.

During the production of 1941 (1979), while working for screenwriter John Milius, Kennedy came to the attention of Steven Spielberg. Spielberg hired Kennedy as his secretary, but both she and he reported that she was a terrible typist who was kept on only because of her good production ideas. Kennedy was credited as associate to Mr. Spielberg on Raiders of the Lost Ark (1981), then associate producer on Spielberg's production of Tobe Hooper's Poltergeist (1982). She began receiving producer credit with Spielberg on the box-office smash E.T. the Extra-Terrestrial (1982), which continued on most of his films for the next three decades. Following her work on the Indiana Jones films, she rose to become one of Hollywood's leading producers. Kennedy at the Paris premiere of The Adventures of Tintin on October 22, 2011.

In 1981 she helped co-found and run the hugely successful production company Amblin Entertainment, with Spielberg and her future husband Frank Marshall. She went on to collaborate with a large and important group of directors, including Martin Scorsese, Robert Zemeckis, Barry Levinson, and Clint Eastwood when they made films for Amblin. Kennedy took over a large portion of the running of Amblin and served as president of the Amblin company until 1992, when she decided to form her own film company with Marshall. She became a partner with him in The Kennedy/Marshall Company, a Santa-Monica-based film-production company with a deal at DreamWorks.

Although working on a variety of projects, she continued her business relationship with Spielberg and became executive producer for both the blockbuster Jurassic Park (1993) and the historical drama Schindler's List.

In 1995, she was awarded the Women in Film Crystal Award for outstanding women who, through their endurance and the excellence of their work, have helped to expand the role of women within the entertainment industry. In 2007, she was the first recipient of Women in Film's Paltrow Mentorship Award, for showing extraordinary commitment to mentoring and supporting the next generation of filmmakers and executives.

In 2005 she was a producer on two of Spielberg's films: War of the Worlds and Munich, the latter of which earned her an Academy Award nomination. Marshall and Kennedy were producers for the US versions of two Studio Ghibli animated features, Ponyo released in 2009 and The Secret World of Arrietty, released in 2012.

In May 2012, she stepped down from Kennedy/Marshall, leaving Marshall as sole principal of their eponymous film company.

In June 2012, Kennedy was named co-chair of Lucasfilm Ltd. alongside George Lucas, whose role was to be eventually assumed by Kennedy. With the sale of Lucasfilm to The Walt Disney Company, she was promoted to president.

Kennedy sits on the Board of Governors of the Academy of Motion Picture Arts and Sciences (Producers Branch). For the 2001–02 period, she was Co-President (with Tim Gibbons) of the Producers Guild of America.