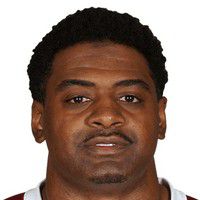 Karlos Montez Dansby (born November 3, 1981) is a former American football outside linebacker. He played college football for Auburn University and received All-American recognition. He was drafted by the Arizona Cardinals in the second round of the 2004 NFL Draft, and has also played for the Miami Dolphins, Cleveland Browns, and Cincinnati Bengals.

Dansby was an All-State linebacker and wide receiver at Woodlawn High School in Birmingham, Alabama, where he was a letterman in football, basketball, and track. He caught 51 passes for 857 yards and five touchdowns on offense, 81 tackles, six sacks, three interceptions, and two fumble recoveries on defense as a senior. In basketball, he played as a power forward, earning All-state honors as a junior. In track & field, he competed in the jumping events and got a PR of 6.73 meters in the long jump as a junior.

Dansby played for the Auburn Tigers football team while attending Auburn University from 2000 to 2003. He was a Butkus Award semi-finalist regarded as one of the premier defenders in college football. While he began his Auburn career at strong safety, he shifted to outside linebacker as a sophomore. In 36 games for the Tigers, he recorded 218 tackles (128 solos) with 10 quarterback sacks, 31 stops for losses, seven forced fumbles, two fumble recoveries, 15 pass deflections, and eight interceptions for 107 yards in returns. He was First-team All-America and a first-team All-Southeastern Conference selection as a senior when he had 84 tackles (50 solo), 5.5 sacks, 13 stops for losses, 6 pass deflections, 4 caused fumbles. In 2002, he was a First-team All-SEC with 76 tackles (32 solo), 4 sacks, 10 stops for losses, 3 interceptions, 4 pass deflections, 2 fumble recoveries, and 2 caused fumbles.

The Arizona Cardinals selected Dansby in the second round (33rd overall) of the 2004 NFL Draft. Dansby was the third linebacker drafted in 2004.

On August 4, 2004, the Arizona Cardinals signed Dansby to a four-year, $3.95 million contract that includes a signing bonus of $2.45 million.

He started in the Arizona Cardinals' season-opener at the St. Louis Rams and made two solo tackles in their 17–10 loss. On September 26, 2004, Dansby earned his first career start after surpassing Levar Woods on the Cardinals' depth chart. Dansby recorded four combined tackles and made his first career sack on quarterback Michael Vick during a 6–3 loss at the Atlanta Falcons in Week 3. In Week 7, he recorded two combined tackles, two pass deflections, and made his first career interception during a 25–17 victory against the Seattle Seahawks. On November 14, 2004, Dansby recorded five solo tackles, deflected a pass, and made two sacks on quarterback Kurt Warner before exiting in the fourth quarter of the Cardinals' 17–14 victory against the New York Giants in Week 10. He was inactive during the Cardinals' Week 11 loss at the Carolina Panthers due to a neck injury he sustained the previous week. In Week 13, he collected a season-high seven solo tackles in a 26–12 loss at the Detroit Lions. Dansby finished his rookie season in 2004 with 60 combined tackles (43 solo), five sacks, five pass deflections, an interception, and a forced fumble in 15 games and 11 starts.

Dansby entered training camp slated as a starting outside linebacker in 2005. Head coach Dennis Green named Dansby and Orlando Huff the starting outside linebackers to start the regular season. He started in the Arizona Cardinals' season-opener against the New York Giants and recorded three solo tackles, two pass deflections, two interceptions, a sack, and scored the first touchdown of his career during a 42-19 loss. Dansby intercepted a pass by Giants' quarterback Eli Manning and returned it for an 18-yard touchdown in the second quarter. In Week 7, he collected a season-high 11 combined tackles (nine solo) and made a sack in the Cardinals' 20-10 victory against the Tennessee Titans. He was sidelined during a Week 11 victory at the St. Louis Rams after suffering a groin injury. On December 24, 2005, he made four solo tackles, a pass deflection, and returned an interception by quarterback Mike McMahon for an 11-yard touchdown in a 27-21 win against the Philadelphia Eagles. He finished the 2005 season with 88 combined tackles (69 solo), four sacks, four pass deflections, three interceptions, and two touchdowns in 15 games and 15 starts.

In a first-round playoff game against the Green Bay Packers on January 10, 2010, Dansby recovered a fumble in overtime by Green Bay quarterback Aaron Rodgers and returned it 17 yards for the game-winning touchdown in the highest scoring game in NFL postseason history.

On May 10, 2013, Dansby signed a one-year deal to return to the Arizona Cardinals.

Dansby signed with the Cincinnati Bengals on March 29, 2016.

Dansby trains at EVO Ultrafit in Phoenix, AZ. His family is from Birmingham, Al .