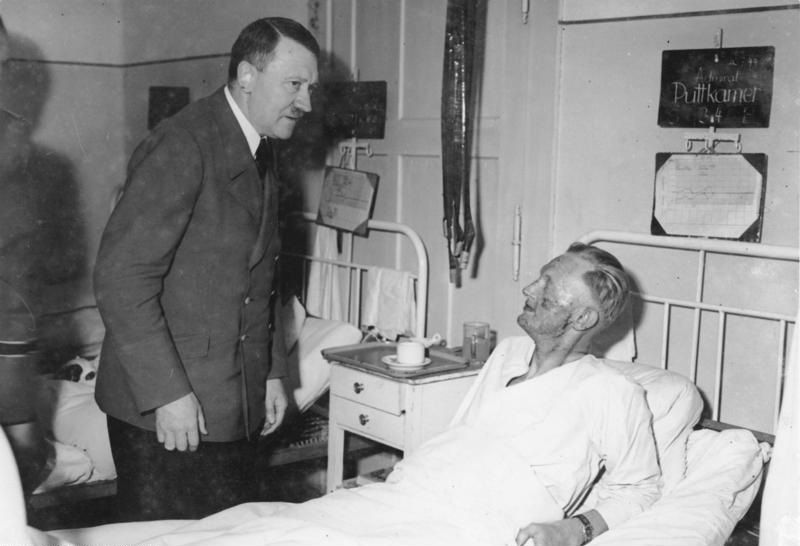 Puttkamer was born in Frankfurt (Oder) and was a member of the Puttkamer family, related to Otto von Bismarck's wife. He joined the Imperial German Navy as an officer cadet in 1917 and served on a heavy cruiser in World War I.

Puttkamer enlisted during World War I on 2 July 1917 as a volunteer in the Imperial Navy's 'Seeoffizierslaufbahn regiment.

In December 1917 he served on the battleship Kaiserin. In the final months of the war, Puttkamer graduated at the Naval Academy Mürwik in a navigation course. He then took leave and joined the Freikorps.

After World War I

In September 1920 he again took courses at Mürwik Naval Academy and training on the light cruiser Niobe.

On 1 May 1923, he was promoted to lieutenant. After his promotion, he was transferred to the torpedo U-boat G7. He then worked as a group officer at Mürwik Naval Academy.

After Puttkamer had been given command of the SMS Adler, he studied and in 1933 graduated as a naval liaison officer from the Mürwik Naval Academy. Shortly after this, he served as naval adjutant to the General Staff until June 1935. In July 1935, he was transferred to the staff of the Commander-in-Chief of the Navy. Puttkamer served as Hitler's naval adjutant until June 1938, when he was transferred to active service.

Wolf's Lair, 15 July 1944, Puttkamer is the second from the left (with only his face visible) just on the right of Oberst Stauffenberg ; Hitler is shaking hands with an unknown officer, Keitel is on the right.

End July 1944, Hitler visiting Puttkamer in the hospital, after the failed assassination attempt of July the 20th.

Immediately prior to the outbreak of World War II in Europe, he was the captain of a destroyer. After the war began, he returned to the role of naval adjutant to Hitler. Later in September 1943 he was promoted to Konteradmiral. Puttkamer was injured on 20 July 1944 when the bomb exploded during the July 20 plot attempt to kill Hitler and was awarded the 20 July Wound Badge.

"The situation during the last few days has changed to such an extent that I am forced to reduce my staff."

On 20 April, Puttkamer, Dr. Theodor Morell, Dr. Hugo Blaschke, Albert Bormann, secretaries Johanna Wolf, Christa Schroeder and several others were ordered by Hitler to leave Berlin by aircraft for the Obersalzberg. The group flew out of Berlin on different flights by aircraft of the Fliegerstaffel des Führers over the following three days. Puttkamer's flight left Berlin on 21 April. Puttkamer was ordered to the Berghof to destroy Hitler's papers and personal belongings there. Therefore, Puttkamer was not with Hitler during his final few days in the Führerbunker. Following the German surrender on 8 May 1945, Puttkamer was held in captivity until May 1947.

He died in 1981 in Munich. He was buried at Waldfriedhof, in Munich.